PFA English Premier League team of the year for the has been published and league leader Chelsea and second of the table Tottenham dominates there. The Blues and the Lilywhites both the team have got 4 players of their own in this XI as expected. Chelsea has been sensational in the league this season and are at the top of the league ladder under their new coach Antonio Conte. The Spurs also have done a great job under Argentine coach Mauricio Pochettino. Their players have been impressive and thus have been selected in PFA premier league team of the year. Manchester United, Liverpool and Everton each have got their 1 player in this selected squad. 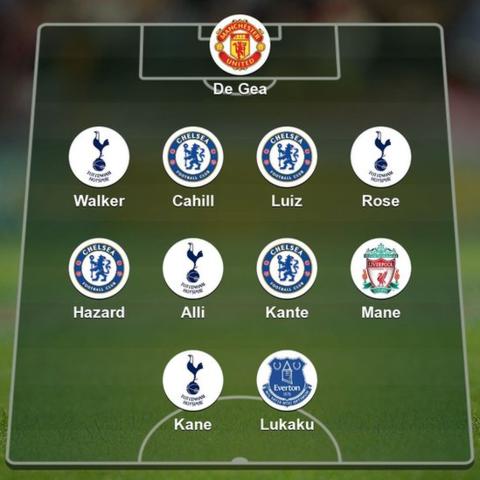 Goal Keeper : David De Gea (Man Utd) : The goal keeper who will stand between the sticks, is no other than David de Gea. The Spaniard has been sensational for the Red Devils throughout the last couple of seasons and is considered to be the best keeper in the league as well as in the world at the moment.

Defenders : Kyle Walker (Tot), David Luiz (Che), Gary Cahill (Che), Danny Rose (Tot): Have a look at the defence! All 4 defenders are either from Stamford Bridge or from White Hart Lane. It indicates you how much impressive the two teams have been in this season. Kyle Walker will play at the right side partnering his club mate Danny Rose at the left with Chelsea duo Luiz and Cahill standing at the heart of the defence.

Midfielders : Dele Alli (Tot), Eden Hazard (Che), N’Golo Kante (Che), Sadio Mane (Liv) : Alli and Kante, the two best central defensive midfielders in the league will be partnering each other in the heart of the mid pitch. Belgian sensation of the Blues, Eden Hazard will play at the left wing position and the only man from Liverpool, Senegal winger Sadio Mane will play at the right side.

Strikers : Harry Kane (Tot), Romelu Lukaku (Eve) : Harry Kane the English super star of Tottenham and Lukaku the Belgian goal machine of Everton will play in the final third as the striker. The selected duo has been absolutely brilliant in the EPL this season and has scored consistently for their clubs and thus beat the likes of Zlatan Ibrahimovic and Alexis Sanchez to settle their place in the XI. Lukaku tops the EPL highest goal scorers’ list with 24 goals beside his name and Kane is right behind the Antwerp born footballer with 20 goals. Sanchez and Ibra netted on 19 and 17 occasions respectively.