Portugal rapidly moving to Russia World Cup Clash from group “B”. Their elevation being so smooth but sure. If they move in this speed they will get the final ticket of the tournament. Specially the last match gave them a different look and image where the Real Madrid star Cristiano Ronaldo has made a great hat-trick in the European region of Russia. Portugal scored 5-1 goals against the Faroe Islands.

The 1st September match in Porto was fabulous. Ronaldo `scored on the third minute of the match and took the hosts one step ahead of victory. There was no doubt about Ronaldo skill his over attacking policy trached the opposition badly and reached the team one step ahead of the Championship. 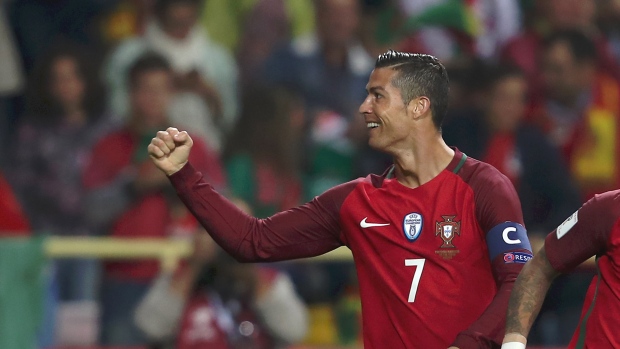 Ronaldo has not been able to play in Spain’s domestic football for Real Madrid for sanctions but there had not seen him disappointed in the field. He performed like he always do. The porto star roared like tiger.  In the 29th minute, the score was doubled the by the four-time Player of the Year.

Faroe Islands repay a goal before the break.  William Cavalier’s goal in the 58th minute has increased the goal distance and score reached on 4-1. After completing a hat-trick in the 64th minute of Cristiano, made the score five. Nelson Oliveira’s goal in the 84th minute was confirmed to be a big win.

Ronaldo has scored 14 goals in this year’s qualifier round, and broke down the record of former Yugoslavia’s forward Predrag Miyatovich. The 32 years old also broke down Brazilian legendary Pele whose score was 77, by scoring 78 goals in 144 appearances.

With this biggest win Portugal won six consecutive matches after losing against Switzerland in their first match of the Group B qualification round. Now the team exist in the second position of group B with 18 points where Switzerland leading the group with 21 points.

On the other hand France leading group After trashing Netherlands 4-0. At present the 1998 World champion consist 16 points from seven matches.

Sweden, who dismissed Bulgaria in 3-2 to, become the second position holder by gathering 13 points. Bulgarian has earned 12 point 12 and holding third position in the group. And the Netherlands are in fourth place with 10 points. It has only ten month to go to start the final tournament. Which team unable to earn point they will be thrown out from the final competition.