Seven-level security arrangements have been made in Russia’s World Cup. But Messi-Neymar-Ronaldo  have given Islamic State threats some concern to them. The stars have been threatened not to play in the World Cup, which will start from 14th June 2014.

This threat is taken well by Portugal star Ronaldo. And so, to confirm his safety, the star has appointed the bodyguard for the WC championship. Because the Real Madrid Superstar does not take any risk of life so he appointed bodyguard for him.

However, this bodyguard is not a simple man at all. Nuno Marcos, one of the world’s best bull-fighter, will work as a bodyguard of CR7 during the Russia championship. According to the British news agency, The Sun, the bullfighter is of 6 feet 2 inches of a monster’s body. Except of bull fighter he is a former military member and well-trained at Mixed Martial Arts. 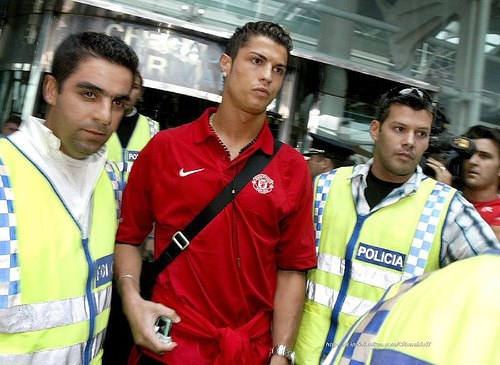 He is stronger man who have a great strength in his hand and whole body. He is able to give protection to the CR7 in whole Russia tournament. His ability and power is really surprising.

Nuno fights with bare bulls on empty heads. Not only that, with bare hands alone, he is able to fight with 10 men. Portugal has a group of eight named Forcados, including Nuno Marcos. Their job is to fight with Bull in leasure period. The middle of this group is Ronaldo’s bodyguard, Nuno.

Why is a bullfighter appointed as the bodyguard? Based on this question, Ronaldo’s close source said Ronaldo loves to see Bull Fight. He saw Nuno there. Nunor likes to see some Bull Fight. Since then, he has been working as a caretaker of CR7. With his the guy is totally safe in the whole WC tournament.

Ronaldo’s bodyguard was also seen in the final of the Champions League Final held in Kiev, this is Nunoke who is able to protect the star from any attack. Russia WC is in threat to the violent fans. Actually they are not fans, they are the terrorist who want to waste the image of the WC tournament.

In earlier it was not happened but in anywhere. But in Russia the terrorism threat really a matter of worry. The England team are also threatened openly and the fans also in the risk if they blow their flag and national song.

However, Russia government trying their best to protect all misdeed. They take all responsibilities of the player and the foreign fans who visit the country.