Serge Aurier is the Ivory Coast international and currently playing for the French club Paris Saint Germain. He is now on the headlines. This PSG defender is heavily linked with plenty of elite clubs where Tottenham Hotspur are one step ahead of all. According to the report, PSG has almost finalize the agreement with Spurs over Serge Aurier issues but Tottenham boss Mauricio Pochettino is still facing competition from number of top rated club including some English giants. It would be the very first signing of Mauricio Pochettino in this summer but yet to get confirmation. 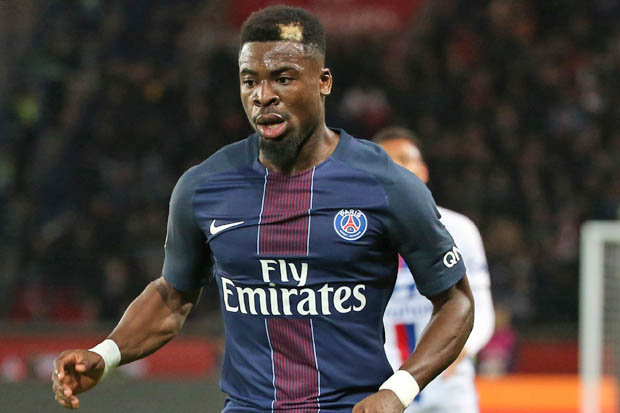 Serge Aurier is just 24 years old and though he is an Ivory Coast international but started his professional career with French Ligue 1 club Lens. He has spent his professional club career in France where spent three seasons with Lens. Later, he arrived another Ligue 1 club Toulouse for just €1.5 million. He has spent another three years with the club but last year, spent a loan period with PSG.

While playing PSG, he has attracted attention from number of clubs and also this defender wants to secure a move away from PSG in this summer. Paris SG also agreed to let him leave from the Parc des Princes and he is now open to offers. Earlier, English giant Manchester United fixed their eye on this Ivory Coast player but in the mean time, Chelsea hs entered the race to collect him. The Blues boss Antonio Conte wanted to secure their back line desperately.

Though, the Blues and the Red Devils wanted to tie him up but it could possible that both of them miss out and all of a sudden Spurs have reached on a settlement over this defender issue and almost prepared to switch to the north London. Pochettino has shown his patient in the transfer window but he is reportedly an admirer of this Ivory Coast international and so, desperate to secure his signing.

However, according to the news, this rising defender is also linked with Serie A top flight Juventus and Inter Milan and also they are looking his movement carefully. They could make a move for him before the summer transfer window closes.

Tottenham Hotspur is the current runner up in English Premier League and also started the new EPL season very good. They have defeated Newcastle comfortably by 2 – 0 but also Pochettino wants to sign some new faces in the season. He stated that they are also a balanced team and doing good just like previous season. And keep balance is very important for the team. But, some new faces would bring new energy to the team.