Kylian Mbappe who is just 18 years old and regarded as the French wonder kid is desperately wanted by French top flight Paris Saint Germain (PSG). Though, PSG is not the current Ligue 1 champion where lost their title to Monaco. Now, the want to buy Monaco teenager Mbappe. Just couple of days ago, PSG bought Neymar from Spanish giant Barcelona in exchange for record fee and now they are willing to pay £183 million for the French international. Some Spanish news portals claimed that within few hours the deal would be completed and final announcement will be made. 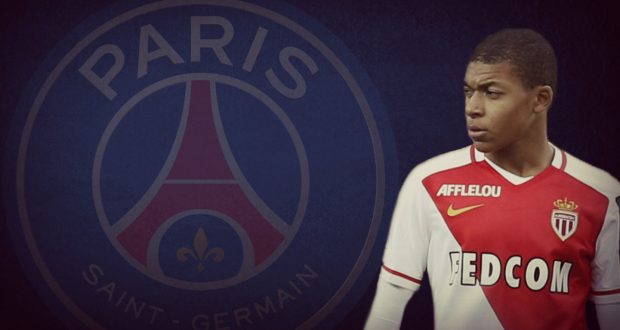 Since the transfer window has started, this wonder kid was focused and number of clubs wanted to buy him. English giant Arsenal and Spanish champion Real Madrid made proposal for this France international but they were rejected by Monaco. However, Finally Ligue 1 champion could not hold him more. Unfortunately Monaco, already sold number of players from their title winning campaign and even this striker will also leave Stade Louis II in the summer.

After rejecting couple of bids for Mbappe, Monaco has taken the opportunity to sell him for huge amount which would be paid by PSG. Reportedly, PSG is ready to spend €180 million fee according to the agreement but the amount would reach up to €200 million, if considering the bonuses. However, the recent relationship between the club and the player is not good  but collapsed. In a training period, the French international spat with the coach Leonardo Jardim. So, coach did not field him in last match against Metz. Though, Metz lost the match by 1 – 0. So, Kylian wants to leave the club for good.

However, PSG also spent huge in the summer and if the deal with Monaco would get confirmation, then they will have to bring more than €600 million from the next few seasons. So, now PSG wants to make a fire sell just before the season end. Their two top players Angel Di Maria and Julian Draxler are already up for sell.

This Monaco striker started his professional club career with Monaco 2nd team in 2015 where he spent one season and then joined at the main team. He made 41 appearances with the French club and scored 16 goals which indicates a great future. He is also in the France national team where he made his debut in 2017 and has played 4 international matches already.