Barcelona reportedly wants to borrow Brazilian forward Gabriel Jesus. Not only that, they also thrown a bid around €19 million for the young star. According to the Spanish outlet Barca was looking forward the opportunity to the Brazilian on Market since a long period. As of passing of the day Barca getting more serious for the 19 years forward.

At present Gabriel plays for Palmeiras football Club and last season his total scored was 13 by apprenching 23 games. His attacking style really the most eye-catching part of any game. He just too good as like as the Brazilian Neymar. 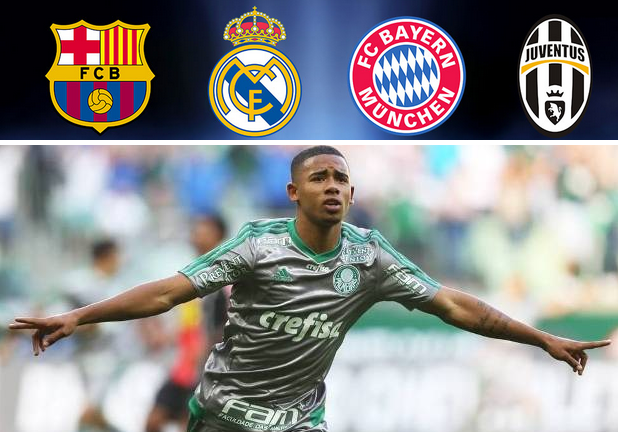 For his great appearances and stand out performance, he is demanded by all reputed english premier league clubs. According to the source Juventus also offered £16.7 million bid for the teen hero. Not only that the winger is also demanded by Real Madrid, Manchester city, PSG and Bayern Munich.

Actually the reality is that all knows the bid for the forward would get higher up 40 million  euros after summer and that the major cause why the all club so desperate to sign him as soon as possible.

Among of some interest club already contact with Jesus Agent and the agent report that at the moment Jesus would not want to move in any side. The agent also mentioned that the future is undefined and nobody knows what would happen in the next day but at present he wants to stay on Palmeiras who have consisted a very balanced squad.

Palmeiras coach Cuca also command the same that this time the forward is not interested to move on any side. Cuca told that the agent warn them not sell pursue for Gabriel and he would not leave the side so far.

This indicate an ascent interest of some of some leading clubs in Europe which are inter looking to stand their attacking side by purchasing the Brazilian forward. But the fact which conquered from the source the appears of other interesting club would overcome nothing. If the move happens, it will be gone to Barca favor at all. It has been chanced to Neymar last season on FC Barcelona and the club is so worried to set a capable striker as his replacement. So any how Barca want to win the race of signing the forward in their side. It is very interesting and also surprising that all reputed clubs shown their interest to sign for one player, while he is too young and inexperience so far.