Brazil’s defender Rahinha who currently plays for Bayern Munich has said that playing with that yellow jersey of Brazil’s national football team is always a difficult thing to do. Because, there are other teams in the world who are always in a want to beat the “Selecao”, even it is a friendly match.

Brazil are now at Melbourne in Australia and they will play a friendly against Argentina on June 9 and another friendly against The Socceroos on June 13. And Rafinha knows that both team will be desperate to beat Brazil even these are friendlies.

Rafinha has told the media while he was training along with the national team at Lakeside stadium in Albert Park that, it is very much possible that Argentina will be pumped up in the friendly against them and Rafinha thinks Australia will no less than Argentina in case of beating Brazil in the friendly match which will be in their home. 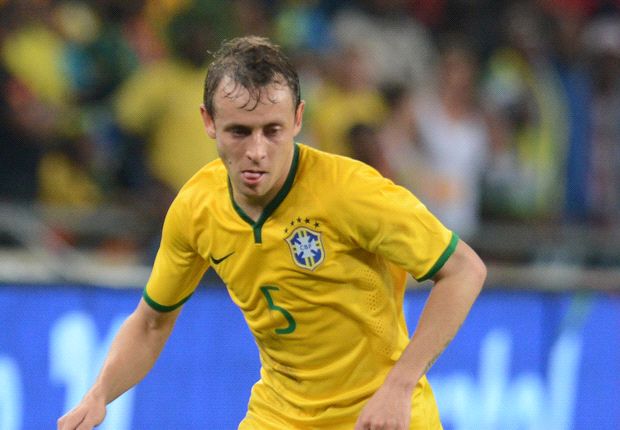 Rafinha said in an interview that, These matches might be friendly matches but people always want to play well when the plays with Brazil and they always want to win while playing with Brazil. Rahinha also added that a game against Argentina is always a classic match as these to team are very old rivals of world football. So, this will going to be one hell of a match. And on the other hand Australia will be very positive and will have the home ground advantage as the game is being held in Australia.

Rafinha said that, it is a friendly match but when two teams and 22 players of those teams get on the field to play against each other it just becomes a normal game where everyone try their best to win the game and when it is against Brazil every opposition player will play with their last blood drop to win the game.

Rafinha also said that he is aware of the quality of Australian attacker Mathew Leckie who plays in Bundesliga for FC Ingolstad. He have had to very impressive performances against Bayern Munich during this season of Bundesliga.

Mathew Leckie who was recently transferred to Hertha Berlin have had many applauds for his great performances against Bayern Munich this season even after his team had lost both the games.

Rafinha said about him is he is a very good player. He played very well against Bayern in the both games and also he had assisted a goal which was scored against Rafinha in a match, the Brazilian defender added. Rafinha thinks Leckie will play a crucial role in the next friendly match.

Rafinha said that playing for Brazil was his only dream he has cherished through his life, even if he have appeared almost 130 matches for Bayern Munich till today.

Rafinha says, there are many players who wants to play for the Brazilian national team. He says that, they are there to play because they deserve to play and represent their country. He added, Brazil are five times world champions and he thinks all the players know their responsibility very well.

Whatever, Brazil will play two friendly matches against Argentina on June 9 and against Australia on June 13. Both of the matches will be held in Australia.