Real Madrid absolutely had a glorious day at the office as they have secured all 3 points from a hard fought fixture against Real Betis, following a Barcelona defeat. The Galacticos just couldn’t expect a better night as their victory and their nearest rival’s defeat has immediately sent them to the top of the La Liga table and that’s also with an extra game in the hand. It was some sweet experiences for the Madrid fans and their post match reactions at the social media proves that as they didn’t only celebrate their victories but also grabbed the opportunity of trolling Barca fans.

Los Blancos hosted mid table side Betis in a league clash which was quite crucial for Zinedine Zidane’s side, at the Santiago Bernabeu Stadium on the Sunday night, just hours later of Barca’s shocking downfall against Deportivo La Coruna. Zizu’s lads had a great opportunity to reach the top of the table and they utilizes the chance very well. 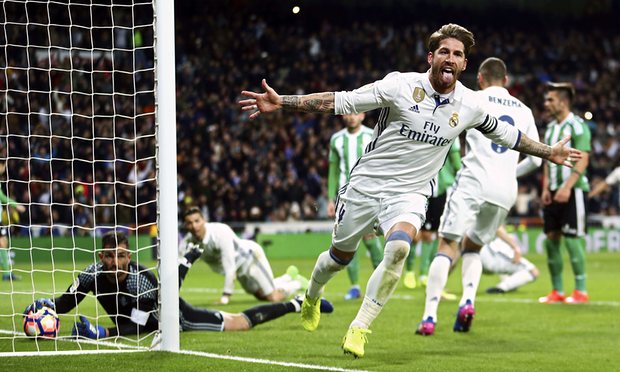 The Heliopolitanos got a good start as Los Merengues’ number one goal keeper Keylor Navas unfortunately put the ball in their own net on the 25th minute of the match and gave the opposition’s the lead. For some moments, there were thoughts in the head of the football fans that Los Vikingos were going to follow the footsteps of their life time rival FC Barcelona on a same night but the Blancos’ talisman Cristiano Ronaldo levelled the line just 4 minutes before the break and Brazilian full back Marcelo provided the assist of that equalizer. It was the 22nd goal of the season for his club for the 32 years old Portuguese attacker. The first half-finished 1-1.

The referee of the game Mateu Lahoz came to the spot light on the 78th minute as he showed the second yellow to the Los Verdiblancos’ Italian defender Cristiano Piccini. So he was forced to leave the field and the visitors had to play with 10 men for the last 12 minutes as well as the added time. It was the 2nd red card of the campaign for the 24 years old Firenze born footballer. Sergio Ramos didn’t miss the chance of having an extra man and did what he always does, scored the crucial decider on 81st minute and handed his team all 3 points which also saw them topping the league ladder with 62 points beside their name from their first 26 league games. Barca are currently at the 2nd place with 60 points and has played a game more than the league leaders.