The Argentine teenager whizkid Benjamin choose Manchester City by rejecting Manchester United and Barcelona offer. The Midfielder confirmed the news in facebook page that he would be going to join with Man City club from next month.

The 15 years old Argentine offered by two leading football club Barcelona and Man Utd to set his future in their side. But the attacking midfielder rejected their offer and reveled to join the MCFC over Man United. 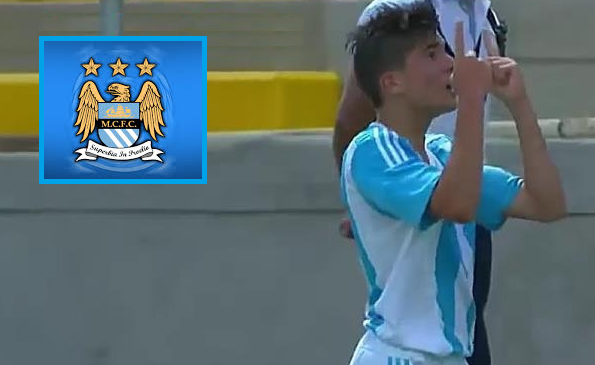 It’s really a surprising decision, where he close to get chant set up his future some renowned club. By answering the question of taking such a decision he said Manchester city one of the best academies in the world and playing under them he would get opportunity to learn many tricks and strategy.

On face book page he left a comment for all questionnaires, where had been written that he is going after a dream, to one of the best academies in the world, with the conviction that his football will develop.

He also wrote that the biggest club like City shown interest to him which was not a simple matter at all and he felt proud for it.

He also requested to all not to take him wrong, actually he did not want to hurt anyone. It was a challenge that he took and the challenge only taken for his future career.

Benjamin Garre becomes the grandson of Oscar Garre who became the part of Argentina team squad in 1986 World Cup winner. Junior Garre is very talented soccer and no one doubted about his future. He has been training in United last few week and insisted to join the side in Summer but suddenly he make the statement he would join Manchester city rather that Manchester United.

The most interesting news is that The Man city totally discarded to give any comment about the deal. Actually FIFA restriction under 18 created the problem so far. According to FIFA rules, it not permit to make any transfer under 18. It is the probable cause why the Sky blues rejected to say anything. But UK as the EU member made sure the transfer can be approved. In that case The City is totally free to borrow the teenager attacking midfielder side.

The deal almost complete and the Argentine will be seen to play at sky blue side and no one have the power to stop the move on next month.