The two reputed football club REAL MADRID and Barcelona have joined the race to chase Valencia midfielder Andre Gomes. It is also learnt to the source the most exoteric club Manchester United also emerged their target on this portuguese play-maker.

The 22 years, young midfielder recently finished Euro 2016 and celebrated the glory of winning the biggest title with national team, Portugal. Gomes is a well experience and top order playmaker, who understand his job very well. After Euro, he became the famous all over the world and his demand raised up very high to the other club. 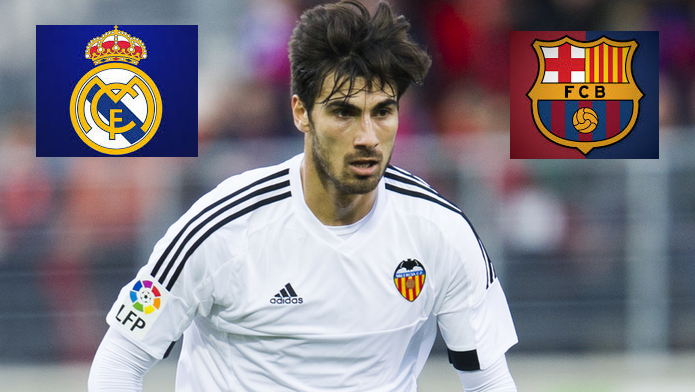 Real Madrid ripen to expend of £55 million on Andre Gomes. They consent to do everything what possible to inquire him as Man United very close to sign Juvi midfielder Paul Pogba.  The whites are wanted to set the playmaker in their side and they have not comported to lost the chance to bag the midfielder by any means.

On the other side Barcelona also want to set the prolific midfielder in their side. Barcelona consisted the top three striker Suarez, Messi and Neymar on their squad and wanted to make the side more potential. They believes that the most brawny play maker can make the line up perfect.

But to borrow Gomes for the side not so easy for team Barcelona. The demand which is set by Valencia for the midfielder, more than €50 million. To sign them, Barca need to pay the amount on cash but present economic condition of the side not so well and they are loathing to pay above €40 million.

Not only Barcelona, Chelsea and Juventus also interested to borrow the central midfielder in their side. And all the club consent to pay according to their ability for the Portuguese giant.

It is learnt to the source last month Chelsea had thrown a offer of £32 million bid which is strongly rejected by their parent club Valencia. On the other side Juventus and Manchester United are very close to perceive the matter and observing the fact.

So it is too difficult to choose best one for anyone because here presented all interested club consist high profile club in different league and many biggest soccer have dreamt to play with them but here the situation totally different. Gomes yet not say anything about that and there have no clue leaked from his agent. So, let’s see what happen and who could do able the transfer clause of Gomes who obtained 37 caps for the national team.