Real Madrid becomes the top of La Liga point table after defeating Osasuna 5-2 on yesterday match. The Portuguese star Cristiano Ronaldo has joined the side after international break. His joining after returning injury proved successive for Los Blancos. It was really a big win at Bernabeu over Osasuna. The win make new record for the side to win 15 matches in a row. With this win they reach on the top of point table.

The Vikings played 3 matches and won the all of them. Now there are existing on the top with 9 points. In last 3 matches their total goal score 10 with 3.33 Avg. They played their first match against Real Sociedad on 22nd August. The match result became the favor of the with 3-0 score. 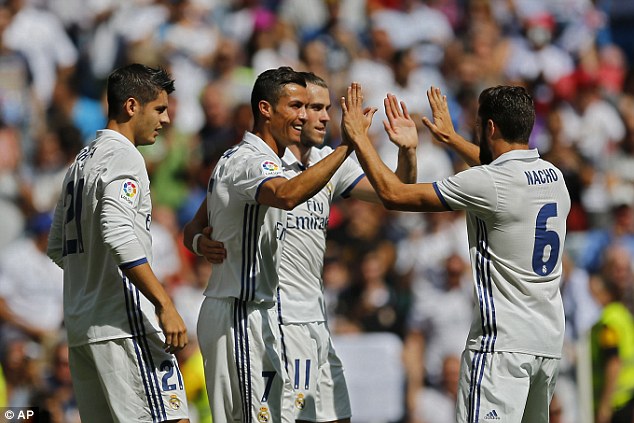 The second match was played against Celta Vigo on 28th August and the Madrid won over 2-1 score. The most interesting thing is that Ronaldo was not present the first two match due to injury. In third match he joined the side and boost the side to get a phenomenal win.

Ronaldo has taken on hand the debacle by knocking at Bernabeu call back  from Gareth Bale in the sixth minute. Before the halftime Danilo and Sergio Ramos make the score 3-0 which was really a fantastic job for the club.  Pepe and Luka Modric also rock the game. And the last they able to score 5-2. The Osana also backed 2 one in normal and another penalty shoot.

On the other hand Barcelona the defending champion of La Liga title lost the last event against Alavas. It’s really a shocking news for Barcelona fan how could lost against Alaves. The most three strong forward of the world Messi, Suarez and Neymar could nothing to do the match and lost by 2-1 score.  The home defeat to Alaves consider profitable for the The Vikings as they reached the easily.

With 7 points Sevilla exist on the second position of point table where Las Palmas also in te third place. Barcelona now on the fourth place with six points. They won only two out of last three games. This time Real Madrid seemed more confident as they were in the past. After winning Champion League trophy their confident level reached on high. Zidane’s team very desperate to win the La Liga title this season. It’s only start who knows what happen in they next let’s wait and watch who will be the next Champion.