Real Madrid was completely stunt by the Celta De Vigo side in the Copa Del Rey quarter final’s first leg clash at the Santiago Bernabeu on the Wednesday night. Celta has produced the biggest shock of the tournament so far as they handed the Galacticos the first home defeat of the season. Real Madrid were unbeaten in this season till the last weekend before visiting Sevilla for an away league clash where they had to face their firts defeat of the season and just 3 days later they have been beaten for the 2nd time in this season, this time in a Copa Del Rey Clash.

The two team from the top tier of the Spanish football came head to head in the cup tie. Although Wales international Gareth Bale was unavailable but the likes of Cristiano Ronaldo, Sergio Ramos, Toni Kroos, Luka Modric, Marcelo started and considering the recent home form of the Los Blancos, an easy victory was expected. But Celta probably had some other plans and they completely stunt and silenced the Madrid fans at the Santiago Bernabeu. 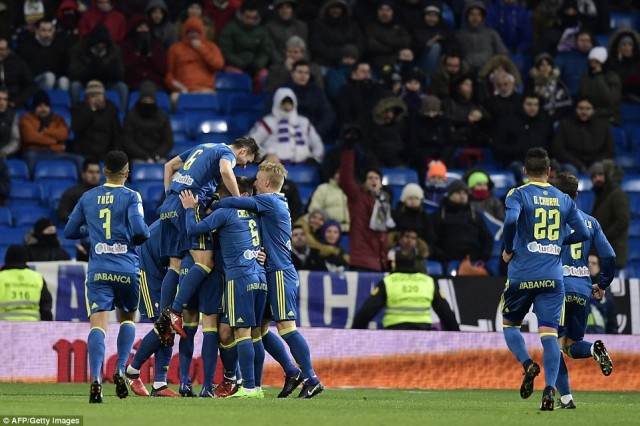 The first half was goal less as no team could break the drought. Galacticos manager Zinedin Zidane brought in Alvaro Morata on the 53rd minute who replaced Marco Asensio. Celta’s Spaniard forward Iago Aspas opened the scoring on the 64th minute to give his team the lead. It was the 15th competitive goal of the season for the 29 years old attacker. Last season he netted 18 times for Vigo. The hosts’ Brazilian left back Marcelo leveled the line on the 69th minute. It was the 2nd goal of the season for the full back. But Celta didn’t take too much time to regain the lead as their young defender Johny Castro scored the decider just a minute later. It was the first goal for the 22 years old this season.

So Los Blancos are once again on the verge of getting knocked out from the Copa Del Rey 2016-17. Last time they had won this cup title was back in 2013-14. Their rivals Barcelona won it the last times. Madrid were expelled from the same competition last season for fielding an ineligible player an are looking to win the title this time but their home defeat has made the situation tougher for them as now they are in a must win condition when they will visit the Vigo next week.

The current champions Barcelona will face Real Sociedad tonight in their quarter final cup tie and another Spanish giants Atletico will meet Eibar at the Calderon tonight.