Real Madrid, the most successful club in the Champions League history has sealed their place in another final. And once again their city rivals Atletico Madrid are the victims. The defending champions of UEFA Champions League are now just a match away from making history. They are on the edge of creating history to be the first ever team to win back to back UCL trophies. To make history they’ll have to beat Serie-A champions Juventus who are also searching their first ever UCL title in the 21st century. They were close to win it back in the 2015 but unfortunately were beaten by another Spanish club FC Barcelona.

Real Madrid who has already bagged 11 UCL trophies in their cabinet are searching for their number 12. Their closest rivals, AC Milan, another club from the Italy has won just 7 times. Los Blancos won the La Undecima in the last season by beating their league and town rival Atletico de Madrid in the penalty shoot out. They also won their La Decima by beating the same opponent back in the 2014 with the extra minute heroics of their players. Los Rojiblancos have been consistently the victim of the Galacticos’ success in the recent years. It is the 4th successive season either they have been knocked out from the competition or has been handed the runner up trophy by the very same opposition. 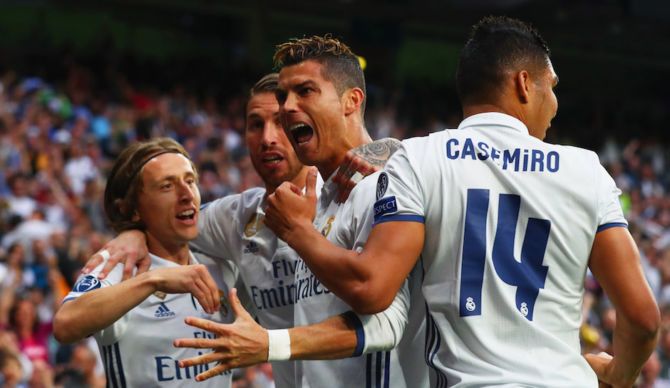 Actually the first leg result took Real Madrid into the final as a brilliant hat trick from their very own super star Cristiano Ronaldo almost sealed their place in the final. Atletico had to win with at least 3 goals’ margin to keep their hopes alive and the situation was if they would concede a goal in the 2nd leg, they would have to score at least 5, which is almost impossible against a strong team like Real Madrid. Exactly that happened on the Wednesday night, despite getting a superb start they couldn’t make it.

At the Estadio Vicente Calderon, the hosts got  2 goals’ lead inside the opening 16 minutes thanks to Saul Niguez and Antoine Griezmann’s strikes. The battle seemed to be on but an Isco netting during the ending period of the opening half saw Simeone’s side getting a 2-1 victory, which proved to be less than enough to qualify for the final. Isco who replaced the injured Gareth Bale, did the job for Zinedine Zidane’s side. The Galacticos will take on the Bianconeris in the final of the UCL at the Cardiff.