Italian midfielder Marco Verratti who has currently linked with PSG, strongly denied to move on Real Madrid club. The Blancos are reportedly offered the French league midfielder in their side but the play maker watered their expectation and rejected the proposal to move in La Liga side.

The 23 years man termed that he was very flattered that a legend club like Real Madrid shown interested to grab him. Marco announced on EFE, a Spanish news agency that he had made the decision that he would stay in The Parisians and he would be successful with the team. He also mentioned he wanted to grab something big from the side unless the club cut thrown him from the side. His try would be continued until he got tired. 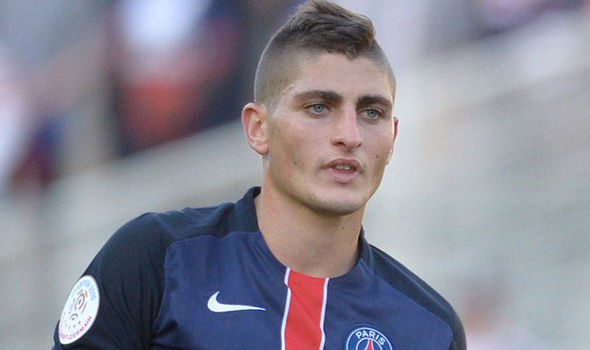 The midfielder also referred that he would not leave the club until the club able to earn the champion league club. This time the PSG coach had not made any negative comment for the FCR as the club had rejected Red Devils lucrative £79 million offer. It became the second rejection of the club in Summer for Marco.

Verratti is a multi talented footballer so far. After joining the side in 2012 he boost the team in many ways. He is one of the most potential attacker of the side. The ability of the midfielder really prolific and to get such a hard working and creative soccer is really a matter of fortune.

He being always honest to the team and plays for the team welfare. As the Galacticos missed to grab the Juve attacker for Man United interest, they wanted to set Verratti  as the replacement of Pogba. But the direct rejection from the midfielder disappoint the whites. Now they have to look once new play maker like Pogba or Verratti.

One side Real are rejected by the Paris SG midfielder and the other side French club wanted to sign the Real Madrid forward Jese Rodriguez.

The Paris Saint Germain boss Unai Emery desperate to bag the forward ahead of the season. And he told he would to try his best to cast the striker in their side. The rumor also gear up in the air that Liverpool and Tottenham Hotspur also wanted to plot the winger in their side.

So let’s see what happen and who win the race of bagging player in their own squad. So guys keep eyeing in our site to get more update.