Ramon Sanchez Pizjuan curse continues for Real Madrid. The home ground of the Sevilla is probably the most unlucky stadium for the Los Blancos. Once again they have gone back to home from the Seville based club with empty hands. The Galacticos have just tasted their first league defeat of the season. They were unbeaten till the first 16 league matches.

The two top of the table side squared off in a crucial league match at the Ramon Sanchez Pizjuan on the Sunday night. A tough battle was expected and the spectators had a good game to watch. Ramon Sanchez is a always a tough place to visit even for the giants and it was proved once again. The first half was goal less as no one could break the drought in the opening half of the clash. 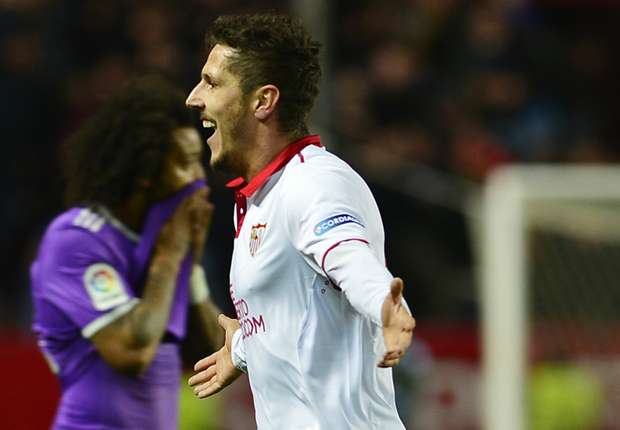 Referee Alejandro Jose Hernandez blew the whistle for a Madrid penalty and Portuguese superstar Cristiano Ronaldo converted the spot kick to the first goal of the game on the 67th minute of the game. It was the 14th competitive goal of the season for the 31 years old for the Galacticos. The Madeira born footballer is also the 3rd highest goal scorer of the La Liga with 12 goals beside his name in this ongoing campaign.

The game was heading towards another win for Los Blancos but Jorge Sampaoli’s men fought hard to snatch the game during the business end moments. Madrid captain Sergio Ramos put the ball in their own net and the line was levelled with just 5 minutes left of the normal time. 27 years old striker Stevan Jovetic caught the big fish as he scored the decider in the very ending moment of the game. It was just the 2nd goal for Sevilla for the Montenegro international. The game finished 2-1 and the Spanish giants were forced to taste the first defeat of the season.

It is the 4th league in a row for Sampaoli’s lads and they have just lost lost twice out of their last 12 league games. Real Madrid is still at the top with 40 points from the first 17 league matches. Sevilla are just 1 point behind than the toppers with 39 points although they have played 1 game more than the Madridistas. Their life time rivals Barcelona are at the 3rd position with 38 points from their first 18 matches. Real Madrid will now be looking to bounce back against Malaga in their very next league fixture at Santiago Bernabeu.