Robert Lewandowski is Polish international striker who is currently considered as one of the best striker in Europe who is under contract with Bundesliga giant Bayern Munich. He joined with the Bundesliga side in 2013 and the deal was confirmed in 3rd January, 2014 for five years but recently a rumour has spread out that the Whites have felt interest for him where they will go to take necessary steps to buy him. In this circumstances, the boss of the Bavarians Ancelotti has stated straight that he is not for sell. 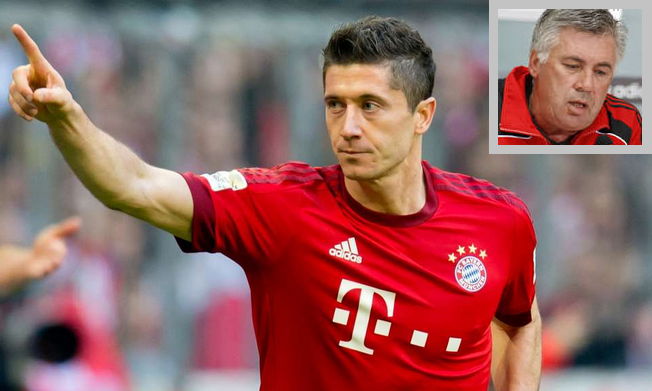 57 years old Carlo Ancelotti was also the Coach of many renowned clubs including Juventus, Chelsea, Paris SG, Real Madrid and so on. He has joined the in the Bundesliga champions in 2016 from Real Madrid. So, he knows Real Madrid well. He has also added that the Whites does not need Robert due to that have already possess the best attacking division which consists of Cristiano Ronaldo, Gareth Bale and Karim Benzema. All three have played regularly. But if they will need this Polish striker too, he conclude that the Bavarians will not let go one of their best striker.

This legendary manager has already won three Champions League titles with different teams as a coach and now he is focusing with his new club. He has already started his training session and teaching his players some secret methods.

The matter of targeting Robert Lewandowski is a little bit odd for Spanish giant cause they have bought already a striker named Alvaro Morata from Juventus in this season. Besides him, the best three forwards of Los Blancos used to play every match. For considering that matter, Lewandowski will not want to move their if he does not get proper assurances to play a maximum number of matches. And if Los Blancos will assure him, then they would probably let go their one of the three best attacker.

Robert Lewandowski has signed a pact with the Bavarians in 2014 with an undisclosed transfer fee while playing with Borussia Dortmund. He made 131 appearances with Borussia and scored 74 goals so far. In last Bundesliga season in 2015/16 with the Bayern, he made 32 league appearances and scored 30 goals and announced the top goal scorer in Bundesliga in last season. He has achieve many individual awards along with 2016 UEFA Euro qualifying top scorer.

He is currently playing for Poland international who made his debut with them in 10th September, 2008. He also competed in last UEFA Euro 2016 which was hosted in France. He has played for national team 81 matches and scored 35 goals.

Due to his brilliant performance in last season, he is wanted by many clubs and a obvious question raise out that if he will receive a big offer, will he remain with the Bavarians though the boss of Bayern has assured that he will not leave Allianz Arena recently.