In form Roma side has seen the other part of the coin in their very last trip to the Stadio Luigi Ferraris. Luciano Spalletti’s lads were flying high before their game against Sampdoria as they were at the top of their form and were expecting another victory when they visited the Ferraris. But even a flying start couldn’t prevent a shocking defeat for the Italian giants and they had to go back home with nothing as they couldn’t even bagged a draw after a solid beginning.

Roma started with attacking football and got quick result as their Brazilian defender scored his maiden goal in a Roma shirt on the 5th minute of the match to give his team a solid start. It was a great occasion for the 26 years old who has joined the Giallorossis from Torino in the last summer window. Another new comer put his name in the score sheet as former Udinese midfielder leveled the line for the hosts on the 21st minute. It was the 4th goal of the campaign for the 22 years old Portuguese. The first half finished 1-1. 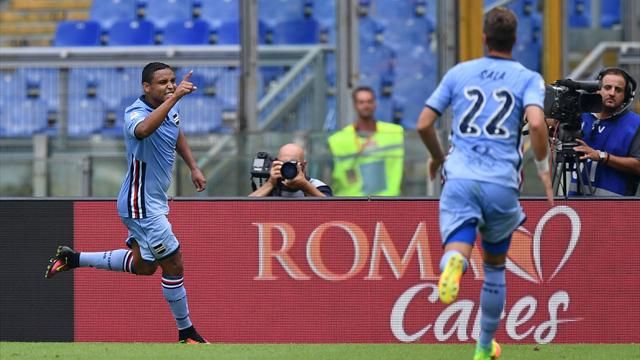 Roma once again retained the lead as the in form striker Edin Dzeko added another goal beside his name this season to make the line 2-1 on the 66th minute. The Bosnian already has netted 20 times this season in all competition for La Maggicas. The former Man City forward is currently almost unstoppable in the Serie-A. The 26 years old Bosnia-Herzegovina international had struck 10 times last season for his club after joining from the premier league club Manchester City.

The team from the Italian capital were expecting another victory but Sampdoria didn’t give up and were keen to get something from the game. Czech Republic attacker Patrik Schick levelled the line on the 71st minute and the hosts once again got back to the parallel situation. It was the 7th strike of the season for the 20 years old Prag born footballer. The Lupis couldn’t get any time to digest the second goal as they were stunned to concede another goal in a very quick succession as Colombian star Luis Muriel sealed the game on the 73rd minute which has given his team very important 3 points and the Roma side were beaten after their 4 league wins in a row.

Luciano Spalletti’s side is currently sitting at the 2nd position in the league table just behind Juventus with 47 points from the first 22 league games. Marco Giampaolo’s men are at the 12th position with 27 points from the very same number of games.