Bangladesh has lost against England at the beginning of the fifth day in their first Test out of two at Zohur Ahmed Chowdhury Stadium in Chittagong. After successfully completed fourth days of their inaugural long format competition, the Tigers were behind of 33 runs. They have started the last day with two wickets in hand. But chasing such mere score at the last day, they unfortunately lost all wickets and the match is won by England by 22 runs. Though, the Tigers strike batsman Sabbir Rahman was in the bat and remain not out with his brilliant 64 scores in 2nd innings. But failed to save the match. 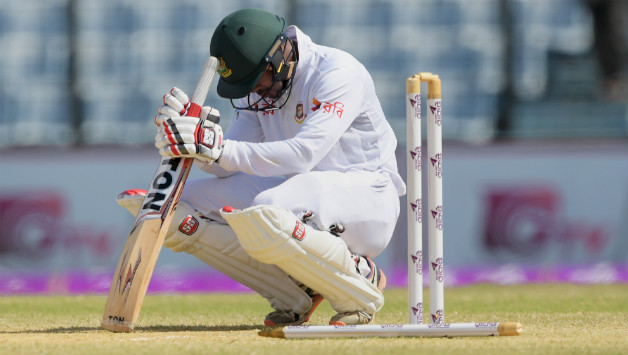 After losing One Day International series by 2 – 1, the Tigers were desperate to win the Test series against English for the first time though they yet to win any Test against them where they almost played eight long format matches till now. Their first competition was started in 20th October, 2016 and English team came to bat first after winning the toss. But the field turned into bowling suitable by then. They scored 293 by losing all wickets in first innings where Moeen Ali scored highest 68 runs for English team. Came to at bat in the first innings of Bangladesh, they could not use their home ground facilities but to score only 248 runs so far based on Tamim’s 78 runs innings. English team was very careful in their 2nd innings but fate was against them. They just made 240 runs. To chase 286 runs all total, the Tigers stumbled from the beginning. No one can made a longer innings except Sabbir Rahman.

Sabbir Rahman started the last day of the Chittagong Test with good impact. Of Course he had under lot of pressure but he was so determined. Taijul made a boundary and the Tigers were approaching to a good end but all were in vain. English team did not change the ball after finishing 80 overs as usual due to reverse swing reason which was so destructive for Bangladesh. He took the last two wickets and the dreams of the Tigers remain untouched.