Tottenham Hotspurs suffer another big injury blow as their English midfielder Harry Winks has been ruled out of the season with a serious ankle injury and will not feature further for the Lilywhites this season. The young star had quite settled his place in the line ups under Mauricio Pochettino this season and became one of the most regulars to be selected in the playing squad but will be missed due to this injury problem.

The 21 years old Hemel Hempstead born footballer made his Senior team debut for his childhood club in the 2014-15 season but was not a regular one to be picked, before the start of this ongoing campaign but the current campaign changed his luck as he improved a lot and already played 33 matches for the main team in 2016-17 campaign and also registered his maiden goal for the Spurs main team. Everything was going fine for the England Under-21 player, but the insipid injury ends his season in the midway of the season. 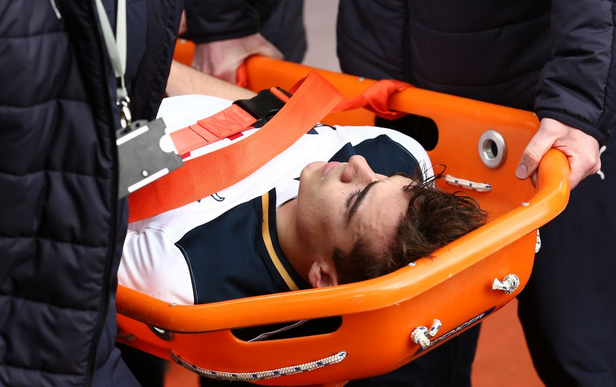 He picked up the ankle injury on the 1st April during an away league game against Burnley. He suffered it during the very last minute of the opening half and was forced to leave the field and French midfielder Moussa Sissoko replaced him on the 45th minute. Although the visitors still managed to secure all the 3 points from the tour with a 2-0 victory over the Clarets but it was quite a big blow for Pochettino’s side. It was hard to digest for the fans as well.

Winks is not the only Tottenham footballer to be ruled out of the season as Argentine forward Erik Lamela had also faced the same fate and he is out with the hip injury which was picked up by the former AS Roma winger in the October 2016 and hasn’t featured since then.

Another super star Harry Kane, who is the talisman of his side, is also currently out with an ankle injury as he picked up this on the last month. But it is a news of hope that the sensational striker has been back in training and the fingers will be crossed that the consistent goal scorer will be fully fit soon. A player of Kane’s caliber is quite impossible to be replaced, who already has netted on 24 occasions this campaign and he is being badly missed by his manager, mates and fans. His comeback will certainly reinforce the attacking part of the team.