Sevilla the UEFA Europa League winners of the previous 3 occasions missed out the chance to feature in it to win it on this occasion but has once again secured a UEFA Champions League spot as they finished in the 4th position in the Liga BBVA. They have bagged 72 points from this campaign and will participate in the UCL next season. They finished behind 3 top giants Real Madrid CF, FC Barcelona and Atletico de Madrid. Villlarreal, Athletic Club and Real Sociedad are fighting for the UEFA Europa League spots.

Sevilla played their very last game under Argentine coach Jorge Sampaoli who has been given the managerial role of Argentina National Football team. Sampaoli will join the Albicelestes soon. But he got a great result in his farewell game for the Spanish club. He just couldn’t expect for a better farewell. Sevillistas Los Blanquirrojos got a massive 5-0 victory over Osasuna who have been relegated from the La Liga. 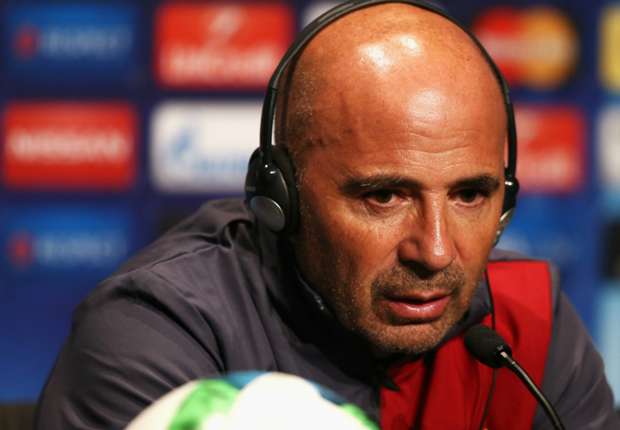 Sevilla hosted the 19th placed side Osasuna in their last league game at the Estadio Ramon Sanchez Pizjuan on the Saturday night. Vitolo Machin opened the scoring on the 1oth minute to give the hosts an early lead. Franco Vazquez doubled the lead on the 20th minute and Montenegro international Stevan Jovetic, who had have a great season with the Los Nervionenses, made the score line 3-0 on the 35th minute. The first half ended with the 3-0 advantage for the home side. Italian attacker Vazquez who has joined from Palermo this season completed his brace on the 60th minute to score his 7th strike of the campaign. Spanish midfielder Vitolo Machin also got a brace as his late blow made the line 5-0 and the White and Reds left the field with a stunning 5-0 victory.

57 years old, Casilda born trainer Sampaoli will now play the role of Argentina national team manager and it is a dream coming true for the former Chile boss. He just can’t wait to manage someone like Lionel Messi and he is very much excited about his new job. He already declared the squad which will face Brazil on June at the Melbourne, Australia. Sporting Gijon, Granada along with Osasuna have been relegated from the top tier competition of the Spanish football and won’t feature in the La Liga next season. Sunday will be the last day of the season of the La Liga and it will be decided that who are going to lift the trophy.