Sevilla has come back to the winning ways against Celta de Vigo. Sevilla lost the latest game of the La Liga against Granada before facing Celta. Estadio de Balaidos is a tough place to visit but Jorge Sampaoli’s lads have been able to be back at home with all 3 points.

Sevilla performed a brilliant football display and secured a comfortable 3-0 victory over the hosts Celta. Vicente Iborra netted thrice in the game. His brilliant hat-trick has closed the gap between third placed Sevilla and second placed Barcelona. Now the gap is only of one point between the two Spanish giants. The current UEFA Europa League holders have earned 30 points from the first 15 La Liga games.

Spaniard midfielder Vicente Iborra appeared in the second half of the game and stole the show. He replaced Nicolas Pareja on the 46th minute, after the break. Iborra opened the scoring on the 51st minute with an assist of Pablo Sarabia. On the 84th minute he doubled the lead for the visitors as Vitolo Machin assisted. He struck the final nail in the Celta Vigo coffin on the added minutes from a spot kick. 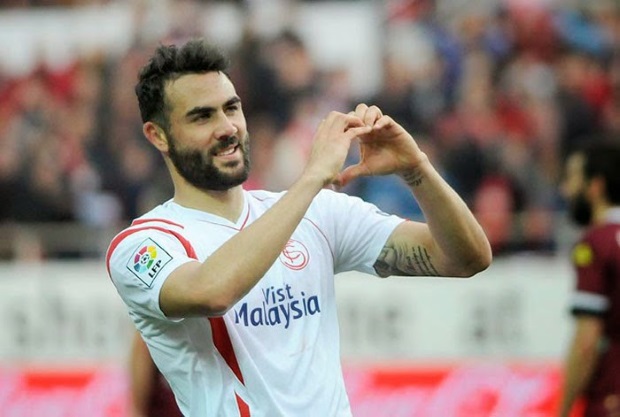 On the Sunday afternoon he just got his first goal of the season for his club but didn’t stop there as he converted it to a brilliant hat-trick. La Liga table has become more competitive with this victory. Real Madrid are clearly on the top with 37 points from the first 15 league games. Their rivals Barcelona is in the 2nd position with 31 points from the very similar number of games. Sevilla is just behind with just one point less than the current La Liga title holders. Celta Vigo is in the 12th position with 21 points beside their name.

Estadio de Balaidos is always a tough ground to visit. In the last 3 meetings between the two sides in this ground Sevilla couldn’t win even a single one. Even Barcelona struggled to do good results in this ground as they got defeated 4-3 by the Celta Vigo side this season at the Balaidos. But Sampaoli’s lads showed great characters to seal an easy win.

It is the 28 years old’s 4th season in the Sevilla. The former Leavnte midfielder has appeared in 146 matches for the Ramon Sanchez Pizjuan based side and scored on 26 occasions. It is the 3rd victory in their last 5 league games and their next opponent is Malaga. Sevilla currently qualified for UEFA Champions league round of 16.