Spanish clubs do have some good reputations in the European arena. In the highest tier competition of the Europe, the most successful club in the history, is none but Real Madrid. The team from the Spanish capital has won 12 titles after the introducing of this competition. All the 4 UCL title holders of the previous 4 seasons, are from Spain. Real Madrid won it thrice in this period and the other time FC Barcelona lifted the renowned silver ware. The last time any team who have lifted this famous title, were German giant Bayern Munich, which was in the 2012-13 season. So the records just show, how glorious history the Spanish clubs do have in the European Arena. 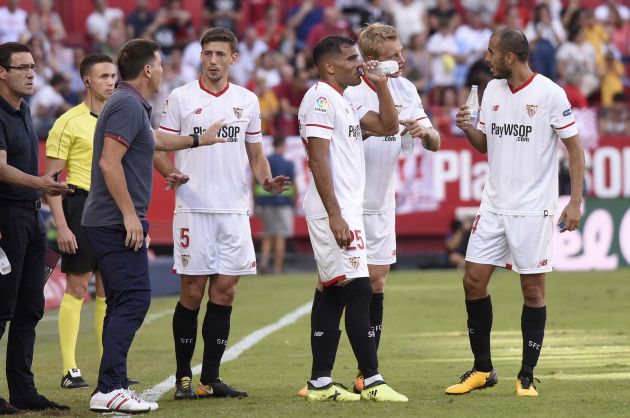 If we move in the fact of the UEFA Europa League, then we could see that in the last 4 years period of time, 3 times the winner was from the Spain as Sevilla FC lifted it on 3 consecutive occasions just before losing the title to English giant Manchester United, only in the very last season.

The Nervionenses also had a great start to the league this season. They were in the second position in the Liga BBVA table just behind to FC Barcelona till the very last weekend. But just a period of 5 days, have changed many things. Eduardo Berizzo’s lads were scheduled to visit the Estadio San Mames Barria on the Saturday but unfortunately a Mikel Vesga strike, handed them a 1 goal defeat in that lunch time clash. Sevilla was followed by Valencia, Real Madrid and Atletico de Madrid in the league table. All those 3 Spanish giants won their own games in the weekend and that has taken down Sevilla into the 5th position.

The Blanquirrojos visited the Otkrytiye Arena at the Russia’s capital to play Spartak Moscow on the Tuesday night. They had gathered 4 points from their previous two UCL games and were looking for their second victory in the European competition. Spartak were yet to get a win in the Champions League this season and were keen to utilize the home advantage fully. The Russian side then just didn’t only managed to win, they actually destroyed the La Liga club as they scored no less than 5 goals on the night. After Quincy Promes’ early opener Simon Kjaer took the visitors in the level pegging but a second half master class performance from the hosts, handed Berizzo soldiers their biggest defeat of the season so far. Melgarejo, Glushakov and Luiz Adriano all found the net once and Promes scored a brace.