The spectators had an absolute insane match of football to watch at the Estadio El Sadar on the Sunday morning. The La Liga fans had an amazing super Sunday as most of the favourites like Barcelona, Atletico de Madrid, Sevilla were in action in the football pitch. The super Sunday didn’t disappoint at all as the day’s actions kicked off with a 7 goal thriller.

Bottom of the table side Osasuna hosted top region of the table’s side Sevilla at the Estadio El Sadar in the opening game of the day. An easy victory was expected as the hosts were completely out of form and are the lowest ranked side in the top tier league of the Spanish football. The visitors were flying high and are the 2nd ranked side in the league just after Real Madrid. Although Jorge Sampaoli’s men could go back to the home with full 3 points but Osasuna had displayed some serious football before having forced to take the narrowest margin’s defeat against the giants. 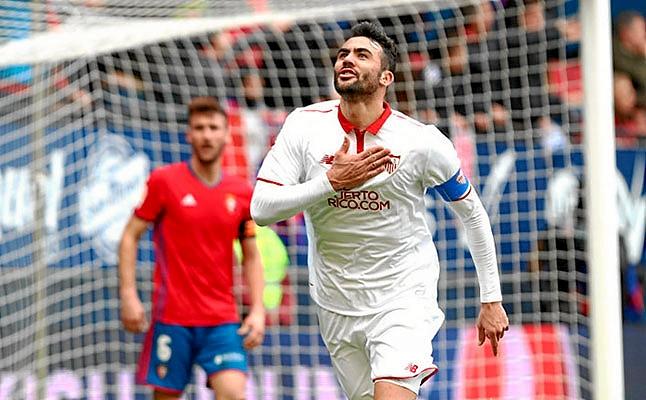 No less than 7 goals were scored and the spectators had no shortage of entertainment. Sergio Leon opened the scoring for the home side on the 15th minute to give his team the early lead. It was the 5th goal of the season for the 27 years old attacker. Vicente Iborra levelled the line on the 43rd minute and the assist was provided by Stevan Jovetic. The first half ended 1-1.

Vicente Iborra had an absolutely unforgettable game and you can be sure about one thing that the Spaniard midfielder won’t forget this game any time soon. He was again involved in a goal but this time he puts it into their own net as he scored an own goal to give the oppositions a 2-1 lead on the 63rd minute. But the tough lad does the penance as he hit back inside the very next 2 minutes to level the line for the second time. He got a brace and that has taken his number of goals this season to the 6. Franco Vazquez scored on the 80th minute and his team got a 3-2 lead. It is the 3rd goal for the Italian attacker in a Sevilla shirt. Then Pablo Sarabia sealed the game during the closing minutes thanks to his 7th strike of the campaign. Home side’s Kenan Kodro netted his very first of the season then but that couldn’t prevent the defeat as the game finished with the 4-3 victory for the Los Nervionenses.