The World’s best all rounder has penned his name as the highest ODI wicket taker of Bangladesh. He hold the position when he has picked the wicket of Rahmat Shah in the debut ODI against Afghanistan. Now his total wickets in One Day being 208 which is more than Abdur Razzak’s score. Razzak got 207 wickets and became the top wicket taker in the country. But yesterday Shakib broken his record and regarded as the top in the list.

Shakib seemed very happy for the achievement. The former captain told to media that he felt good to be the top scorer in taking wicket in the country. But he admired that he would be more happy if he could the same achievement in case of running score. The all rounder also claimed since some time he got no chance to bat and unable to show regular performance. At last he termed that he will be doing his best to provide the team. 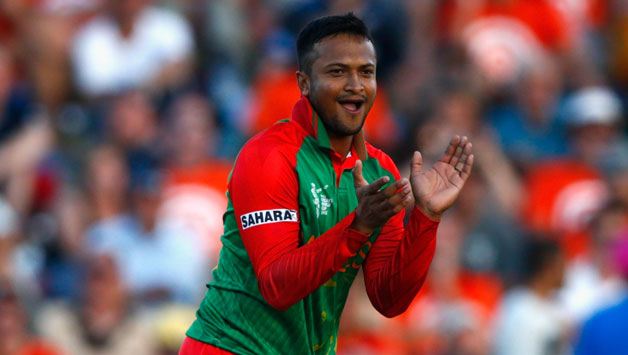 Last day against Afghanistan he played a potential role for the team. He broke down their strength of partnership. After that the game come round in Bangladesh figure. He dismissed two important wickets and scored 48 out of 40 deliveries which turned into him player of the match.

The 29 years old made his debut on One Day International field in 2006 against Zimbabwe. Soon he promoted as the team vice captain and the Captain respectively. Now he is ranking with world no 1 all rounder so far. He got the second position in last ODI against South Africa. And this season he change the field and terminated as the highest wicket shooter of Bangladesh.

Bangladesh cricket team captain Mashrafe Mortaza is also considering the same line. He is consisting in 205. So he has the also ability to cross the line of highest wicket taker in Bangladesh.

Apart of these experienced bowler Bangladesh team also consisting some new and young talent like Mostafizur Rahman, Taskin Ahmed, Rubel and also so many. Taskin also played well in the debut ODI who recently completed his bowling action. ICC released him from the charge of illegal bowling action. On the other hand Mustafeez is ruled out from the side due to injury. Arafat Sunny is passed the ICC test but not selected for the Afghanistan series. The Bangladesh cricket fans are hoping these guys will rock in future and hopefully cross all the limit. So guys keep eyeing in our site to get update.