ICC Champions Trophy starts on June 1 and the teams are examining themselves in the practice matches. India the defending champions started their campaign with the practice match against the Kiwis at the Kennington Oval, London on Sunday. The Men in Blue are hot favourites for this campaign too and they showed that once again why they are being considered as one of the high profile contenders for the title. India will start the main tournament journey on June 4 against their lifetime rival Pakistan. Before that they have been scheduled to play New Zealand and Bangladesh in the two warm up matches and in their very first one they managed to outclass a shaky Kiwi side.

The Blackcaps just came to England after winning the triangular series at the Ireland. Two vital batsmen of their side, opener Tom Latham and Ross Taylor was rested for the day but regular captain Kane Williamson was back into the xi along with Guptill, Boult and Southee. KW won the toss and elected to have a bat first. India missed Rohit Sharma who was yet to be there at England and Yuvraj Singh who was down, said by their Captain Virat Kohli. 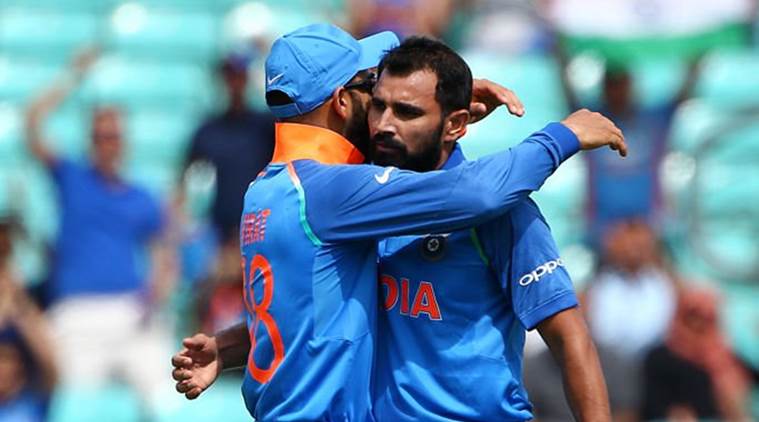 Mohammad Shami had the new ball in hand and after a very good start in the first 2 overs, Guptill gave his wicket very cheaply. Kane Williamson struggled in the pitch and Neil Broom went for a golden duck. All of them were got out by Mohammad Shami. Despite the falling of the wickets, Luke Ronchi continued to play his shots. The wicket keeper batsman scored 66 but too followed Corey Anderson as the Blackcaps were in trouble at 110 for 5. Santner, Milne, Grandhomme, Southee, Boult no one could reach the double figure. Lone warrior Jimmy Neesham remained not out on 46 as his team was packed for 189. Shami and Bhuvneshwar Kumar both grabbed 3 wickets. Ravi Jadeja got 2 scalps for only 8 runs in his 4 overs.

Ajinkya Rahane was out for 7 and Dinesh Karthik couldn’t even get any single run. Shikhar Dhawan was gone for 40. But Virat Kohli reached his 50 and was remain not out on 52 when it started raining at the Oval. MS Dhoni was undefeated on 17. India were 129 for 3 at the end of the 26th over. As the rain didn’t stop in time the team from the South Asia grabbed a 45 runs victory in the Duckworth Lewis method. Kohli’s men will take on Bangladesh in their next practice game.