The hearing went on more than 3 hours where ICC match referee Andy Pycroft heard the accusations which were laid by ICC chief executive David Richardson. Andy Pycroft heard from both the parties & evidence was given to him by the on field umpires & Marylebone Cricket Club’s Head John Stephenson. The on field umpires told that they had no idea about the incident during the game. They added that if they had known it that time, they would have taken steps immediately. After seeing all the evidences protea’s stand-in captain was found guilty. 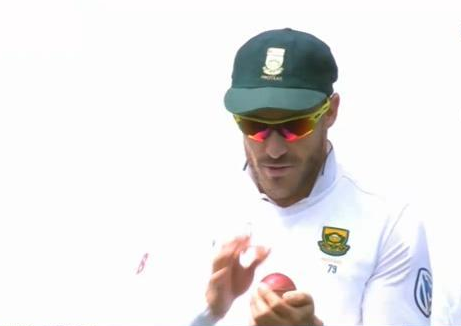 Head of the MCC, John Stephenson has confirmed the view of the MCC & they believe, artificial substance was certainly used which was clearly seen from the TV footage.

Du Plessis has 48 hours time to appeal against the result. CSA has confirmed that Faf will appeal against the verdict. Protea Skipper believes that he is not guilty. His appeal could be resulted in increasing, decreasing or amending the sanction.

But this is not the first time that the 32 year old cricketer was involved in a ball tampering incident. The Pretoria born cricketer breached the ICC’s code of conduct for the first time in 2013 against Pakistan. On that occasion, he rubbed the ball on the zipper of a trouser pocket.

At this moment Du Plessis’ team is flying high. After winning ODI series 5-0 to whitewash Australia in Africa’s home soil, they have also secured the unassailable lead of 2-0 in the ongoing test series against Australia in their own home soil. But the protea captain is now under the limelight for his ball tampering incident.