Spain could not win their first World Cup preparatory match in front of the World Cup.  The 2010 world champion unable to defeat the Switzerland. The game ended with 1-1 draw. Swiss left-back rider Rodriguez gave the ball to La Roja 1-1 in the first half with his perfect shot of the team.

On Sunday, 3rd June, Spain have dominated the game since the start of the match in Villarreal. But they did not catch the goal. However, there was a great chance in the camp in the 21st minute. Davey Silva could not keep the ball prepared by Diego Costa Moram. 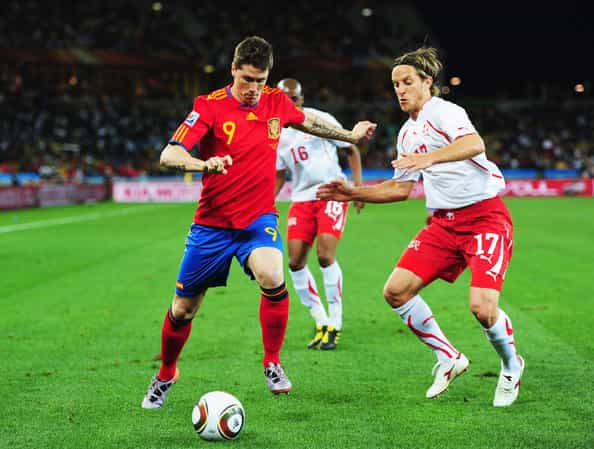 Finally, in the 29th minute of the match, there was a goal in the Spanish camp. City midfielder Silver left the direction of the left-hand side, because of the D-box, Defender Alvaro Andre Solar found the right-footed mesh in the net.

Ricardo Rodriguez returns to equalize Switzerland in 62nd minute from the right side. Stefan Stewart was caught by the shot, but the goalkeeper David de Haya could not be completely risked. Defender Rodriguez targets easily from goal-line to left foot shot.

Spain is one of tough contestant of the competition and they have many star players in their side. So the expectation is high from the team. But their such type of game really disappointing to the fans. Last season their performance was dull. They were good bye from the group period. But this season they are confident to do something.

Spain contributing in the B group with Portugal, Morocco and Iran in the World Cup. Spain will start the World Cup with a match against Portugal on 15th June. The group is quite tough and it will not so easy to defeat them.

Switzerland, Costa Rica and Serbia have been partners in the Group ‘E’ Group, where their tough contestant Brazil. The team will play the WC tournament on 17 June with the match against Brazil. It will be not so easy to play in the group round.

However, The Swiss boys performed fantastic in the game. Draw with Spain not easy and with the game they proved their power and strength front the world. The performance was so appreciable and they inspired all the team that anything is possible in football.

However, the WC preparation match not so good for the WC favorite. As we can say about World Champion Germany. The international friendlies was not good for them. They lost two game continuously which is not good for them ahead of the WC championship.