Lionel Messi and Cristiano Ronaldo have made Baron d’Or their personal property. In the last 10 years, both of the world’s most respected footballer have shared this award equally. Andrés Iniesta could not lift this award once he was ruled out by Messi-Ronaldo so far.

However, Iniesta got Ballon d’Or award without winning that. The Barca star was never able to lift the honor and for that France football want unconditional apology to him.

France’s football being the organizer of the honor and their seeking the apology from Iniesta, like the victory of Ballon d’Or! France Football Editor Pascal wrote in France language ‘Perdan Andres.’Whose English meaning is ‘Andres, forgive us.’ 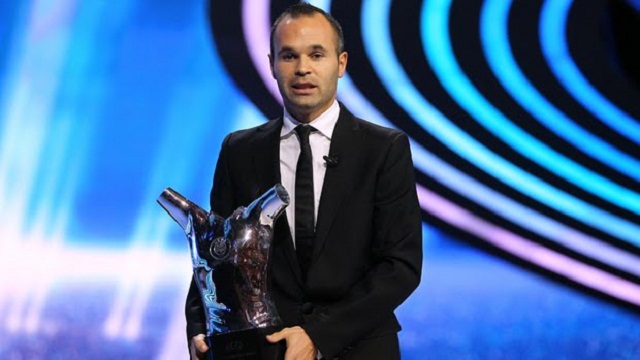 There is another reason behind this paskal apologizing. The midfielder did not got the award, it not means he was not better than Messi or Ronaldo. Even, France’s football secretary thinks that they guy worthy of the trophy twice or at least once. Though he did not mentioned the year basically but the year was 2010.

But the irregularities of the organizers, due to biases, the award did not go to Iniesta! And the award given to Messi. However, the language of writing, indicate that  in 2010, Iniesta was the real claimant to the trophy. But the side of the organizers it was given to the Argentina star.

Messi wins FIFA Ballon d’Or in 2010. The first runner up to get silver balls to the hand hands of Iniesta. Xavi Hernandez win the bronze ball as second runner up. Many people questioned how Messi received the award from the service. Because Barcelona could not win any title without La Liga and Supercopa.

For the club, with two titles, the country has won the World Cup for the first time. And Iniesta’s role was the most behind Spain’s victory. The Spanish midfielder was naturally the claimant of the golden ball. The claimant was his club and national team teammate Xavi and the Netherlands Wesley Snyder also.

After so much apologies, due to the absence of the trophy, it’s the end of the colorful career of Iniesta. If everything goes well, then the midfielder will leave Barcelona and join to the China’s Super League, at the end of the season. That means one of the best midfielders in history is about to quit the career light. But the hope of getting the trophy unfulfilled in his career. That being the most tragedy of his life so far.