In the following year of 2018, the 21st edition of FIFA World Cup is going to start and Russia will be the host nation. So, there are lots of works to do in the meantime and one of them is to make ready the hosting stadium. The Stadiums are getting prepared for FIFA World Cup 2018 Russia. Total twelve venues have selected for the competition where seven of them are yet to prepared. The work is continued on the seven grounds which are still under constructions and they are about to an end. The selected venues are located in eleven different host cities. 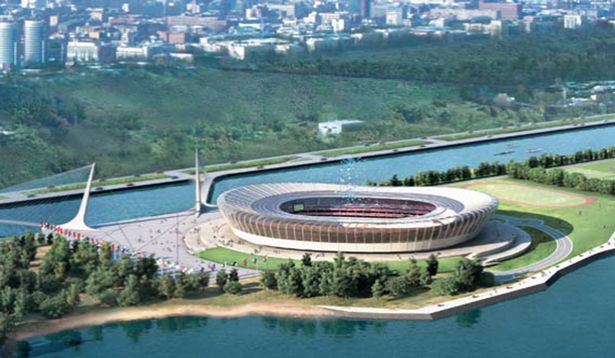 The rest four grounds of Russia just hosted FIFA Confederations Cup and so, they are ready. Plus, there is a stadium in Moscow named Luzhniki Stadium which is also ready to welcome the viewers for the top level competitions.

The pitch have been laid to Ekaterinburg Arena already and due to the continuous warm weather, grass is still growing. The Rostov Arena and Nizhny Novgorod Stadium would be prepared within short time hopefully. Besides, the specialists have expected to plant seeds to the grounds within couple of weeks and already all the preparations have completed. The stadium’s canopy works have already completed and the statement is made by the head of the construction company.

However, the constructions of Volgograd Arena, Mordovia Arena and Samara Arena are nearly finished but there are also few more works to do. Head Construction company can renovate the area surrounding facilities of the ground of Samara Arena and according to the news, they have taken all steps successfully. Volgograd Arena is one of the reputed of them all which was founded earlier but now, it is also under construction and here total four World Cup matches matches will be placed.

FIFA World Cup is the biggest meeting of football competition where thirty two nations used to participate since long. The competition was founded in 1930 and the same year, the first episode of it was hosted in Uruguay. Just thirteen teams took part in this event then. Since then, Russia yet to host this biggest competition of football and so, they are very excited to host such kinds of largest and prestigious competition.

Selected all venues are located in Russia where most of the stadiums are new and already under construction and rest few are old which are about to upgrade. Russia are ready to spend huge to make this competition better than ever and they are desperate about it. Though, they yet to get any opportunity to arrange any episode of this largest football event and so, they want to make the chance count.