Manchester United grabs their 3rd league victory of the season. The Red Devils are flying high, very high indeed as they have made it 3 out of 3 in the top tier competition of the English football. After the retirement of legendary manager Sir Alex Ferguson, the most successful English club, Man Utd are yet to win a single EPL title. They have failed to secure the famous silver ware in the last 4 seasons and their current head coach, Jose Mourinho is the 3rd United manager during the post Ferguson period so far. The Chosen One, David Moyes failed to do it and was sacked even before finishing his very first season after joining the Red Devils from Everton and then Dutch manager Louis Van Gaal too couldn’t make it done. Even the Special One struggled in his maiden campaign. But the Portuguese football genius is having his magic tricks in the right way this season. 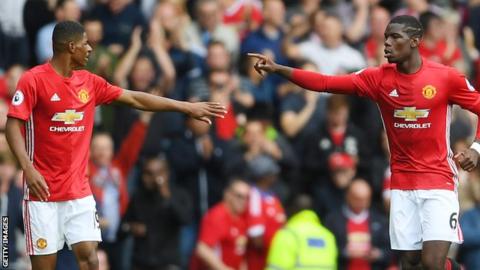 The Old Trafford based club is considered as the most popular football club in the planet but their performances in the last couple of seasons have been below par and has faced many criticisms. They had struggled in the EPL and also in the European arena but after clinching the UEFA Europa League last season, a few revolutionary changes were indicated. Despite the departing of their regular captain Wayne Rooney they are seemed to be much more stronger side now. They are the only team so far in the league to win in all their 3 matches, which is quite incredible. They destroyed West Ham with a 4-0 victory in their season opener and then Swansea City was the victim of their goal flood at the Liberty Stadium where the score sheet read the very similar.

Mourinho’s lads got Leicester City as the opposition in their 3rd EPL clash. The Foxes visited the Old Trafford with a fresh memory of a 2-0 victory over Brighton. The first half ended goal less. But the player changing did the job for Jose. Marcus Rashford, who replaced Juan Mata scored on the 70th minute to give his side a crucial lead. Another substitue Belgian tall figured midfielder Marouane Fellaini, who was brought in for Henrikh Mkhitaryan, sealed the game 12 minutes later, thanks to Jesse Lingard’s assist. Surprisingly, Jesse too was a sub as he came in exchange of French forward Anthony Martial. United stands tall at the top of the league table with 9 points and a positive GD of 10 goals.