Gujarat Lions Becomes the unbeaten team of VIVO IPL where they exist on top of point table with 6 points. The most engrossing thing is that the newcomer team Gujarat which owned by Keshav Bansal and whose future yet undescribed, was shown a terrible performances since the beginning. Actually the team replaced Chennai Super Kings or Rajastan Royals for next two season but it can be termed that BCCI should think once again about the team future.

The franchises had played their first match against King XI Punjab on 11th April where Gujarat beat Punjab by 5 wickets. It’s such a big matter to beat punjab on their home ground. Under the captaincy of Suresh Raina, Aaron Finch showed a invincible performance of 71 runs out of 47 balls including 12 fours. The Australian hard hitter became the player of the match. 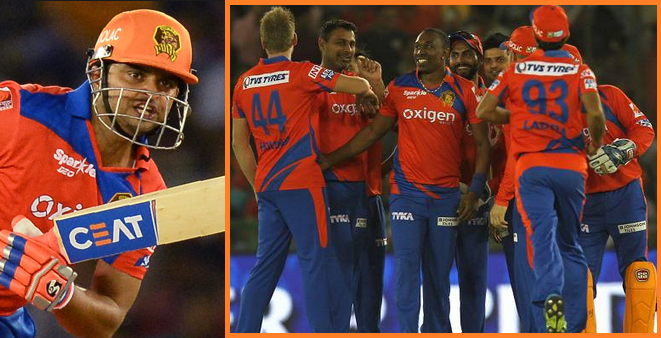 The second magic of the team uncovered on 24th April at Saurashtra Cricket Association Stadium, Rajkot when they played their own ground against Rising Pune Supergiants, another new participant of VIVO IPL. Raina’s team Gujarat cleanly washed Dhoni’s Supergiants team by 7 wickets. By winning the toss the team Pune elected to bat first and gave 164 runs target by falling of 5 wickets which was easily chased by Gujrat. Aaron Finch opted man of the match once again with 50 runs off 36 balls.

The third match was played against the defending champion Mumbai Indians at Wankhede Stadium, Mumbai on 16th April where they defeated the opposite team by 3 wickets. Aaron finch’s 67 once again boost the Gujarat to grab their victory. It is the first time in IPL history someone consecutively achieved such a brilliant success. It’s really a fabulous performances of making hat-trick in three matches.

The next match of Gujarat Lions will be played against Sunrisers Hyderabad on 21st April at Gujarat home ground Saurashtra Cricket Association Stadium, Rajkot. We would like to add that Sunriser Hyderabad becomes the franchises who able to grab one victory out of last three matches.

At present the franchises exists on the top of point table where Kolkata Knight Riders and Delhi Daredevils on the second position along with 4 points. Unfortunately Kings XI Punjab yet not won any single match out of three and consisting last position with 0 points. Here we have given the current point table in below.

With this we complete the eight franchises current position in VIVO IPL but the story has not ended in here. There have many more matches in ahead which will have to be played by the respective franchises. As we saw numbers of new faces included on the event in different side with the past members. It is still difficult to predict one’s favor because here presenting all team are very tough and the their consisting players are world’s best T20 specialist. Perhaps this called the IPL where anything is possible for any team. So guys let’s watch what happen and who become the next IPL champion. To get IPL update stay with us.