Sujuki rookie Alex Rins has suffered  a small fracture in his right ankle in an accident while training on a motocross bike on Thursday, during the training session. The team Suzuki has confirmed that Rins had been in a non-surgical medical procedure to gain fitness in time for the Argentina MotoGP round next weekend.

The MotoGP rookie suffered the blow while on his Suzuki RM-Z motocross bike. He was taken to Barcelona Hospital right away after feeling pain in his right ankle and the result came out as he has damaged and gained a partial fracture in his talus, the bone which perches at the top of the ankle and transfers the weight between leg bones and the feet. However, He was examined by Dr. Xavier Mir of Dexeus Institute and he announced there is no sign of dislocation of bones and medical team has decided not to undergo any surgery in his ankle. He does not require any immediate surgery as the injury is not that much big to undergo a surgery immediately. But, Rins has been given magnetotherapy and physiotherapy by the Spanish medical team who are in charge of Alex Rins’ nursing. The 21 years old Spaniard will have to pass a fitness test on Monday to gain the green signal from his medical team to go to Argentina at the second race of the season. He will have another scan that day to determine the scale of his injury, the recovery rate and those will decide whether he will go Argentina or not. Whatever, The injury has put a question mark in his participation at the Argentinian Grand Prix at Termas de Rio Hondo on next Friday. 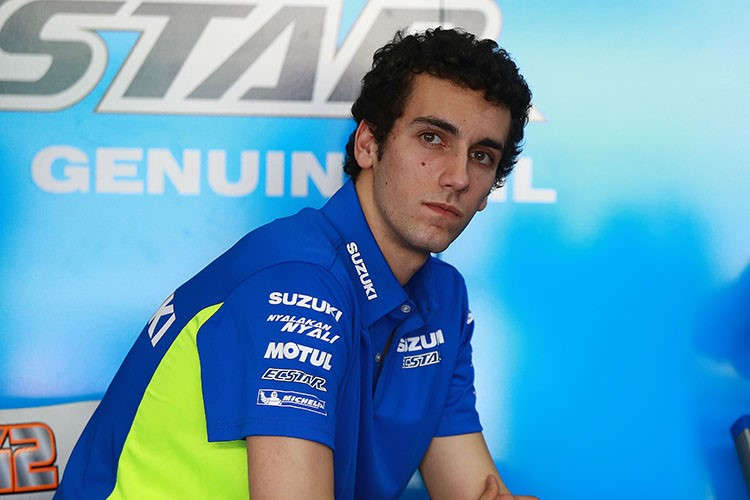 Alex Rins stepped up to MotoGP from Moto2 last season and debuted in MotoGP for the Factory Suzuki after missing almost the whole 2016 post-season due to a back injury, yet he finished third with Kalex in 2016. So he will be desperate to participate in all races this season as he is now promoted up to the top level of motorcycle racing and he will want to make sure he does not miss any of the races this season as he will learn faster at top level and he should not be wanting to miss that track-time.

Alex Rins has finished in ninth position on his debut in MotoGP 2107 Qatar season for Suzuki. Regarding the race he said, “It was a really good weekend because during the weekend we had some problems with the front fork. In the warm-up we tried to find the set-up”.

He admitted the delayed start of Qatar Grand Prix made him a bit nervous. He said, “For later in the race I was a little bit nervous at the start because of the delay and everything. Anyway, I made a really good start for my first race so I am really happy.

Whatever, The second round of 2017 MotoGP is about to take place at Termas de Rio Hondo at Argentina on 7th to 9th April. Let’s see whether the Suzuki Rookie Alex Rins races there or not.