The tour of New Zealand ends with a big defeat to Bangladesh. One day after the failure of rain in the second innings of the four-day test in Christchurch Bangladesh lost.

Once again they lost their way in the second innings and New Zealand won easily. Guests are losing 7 wickets in Wellington and lost 9 wickets in Christchurch Test. The third day of rain washed away the whole game. On the fifth day of the match they still could not pull long. Finally the Black Caps reached the target of 109 runs.

The day began with dreams of winning and hope to lead. But ended with The depression of the lost. New Zealand traced all the hope. Still, there was the possibility of a draw when it has been starting rain. But Bangladesh is not a gift, through the accustomed. Batsmen came wickets themselves liberal. Slowly the dream of winning has been graved. 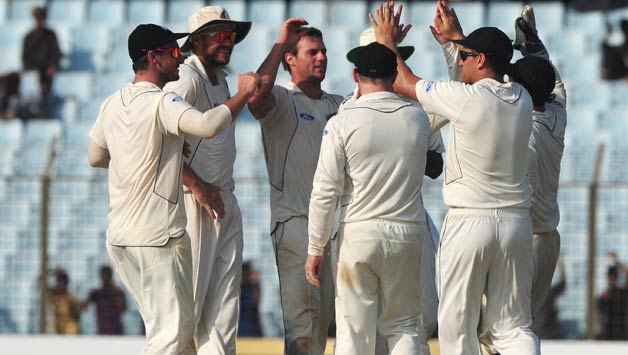 The tour began with a warm-up match in December, and had ended with the lost of all international matches. In Christchurch, New Zealand took 9 wickets. The welcome team Did not play the previous day, and they won the three previous matches.  After One Day and Twenty20 series Bangladesh whitewashed by New Zealand.

Tests on the fourth day, however, cast a little excitement. Test results are not of course, about the length of the match. It is considered to watch the match Whether it gone to the fifth day. But unfortunately it finished over that day.

It was started with Tamim Iqbal. Left-handed opener was unable to extract the best captain. It was short and to the boundary fielders. There is no understanding of the purpose of Tamim. But his career also turned into a trap like many times.

Still, there was fighting in the second innings stand of majestic and Mahmudullah indication. Outside the majestic ball away after the start of the fall. By hitting 4 runs Shakib found the life. To repeat the same shot they got out and kicked out from the field.

The match almost finished but Taskin Ahmed and Kamrul Islam Rabbi was live the match. Perhaps this is the biggest achievement of both the Test series. Spread light bowling, batting and showed glimpses of last night. They played some random shots. Alongside them, they hit some great shot. Two 51-run stand for the ninth wicket of the match length has been increased slightly. But final lost the series.