Thiago Silva, who is a Brazilian national team defender and currently playing for Ligue 1 club Paris SG has come again at the front page of the news. He is reportedly heading towards the Serie A club Juventus in next summer but the final announcement is yet to be revealed. He is the current skipper of French side and was in the radar of the Blues boss Antonio Conte since long. Conte wanted to tie him down to strengthen his back line but Juventus has got the trump card. Besides, the Brazilian defender has plenty of experience by playing with Italian club where he spent almost three years with AC Milan before arriving at the Parc des Princes in 15th June, 2012. He made almost 93 league appearances with Milan and netted five times so far.

However, some Italian news portals have already claimed that his move to the Old Lady is ‘virtually signed’ but he has still six months contract left with Ligue 1 side. He has obviously a chance to extend his contract with Paris but he has chosen Juve instead. 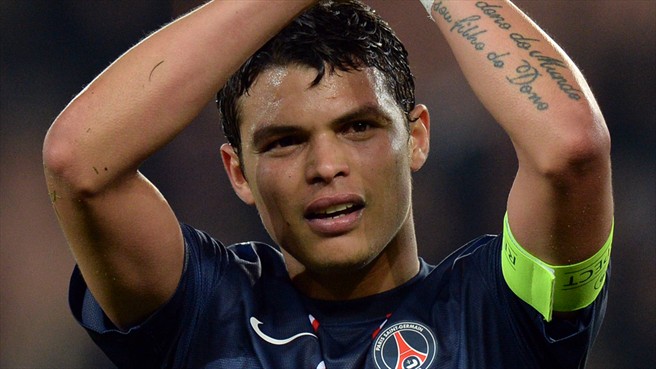 Paris Saint Germain lost a couple of talented players in last summer transfer window where famous defender David Luiz one of them who was sold to the Blues from more than €38 million. Another one is Swedish legend Zlatan Ibrahimovic who made it to the Red Devil for free. Now, they are going to lose again one of the key player Silva.

Born in Rio de Janeiro, Brazil, Thiago Silva is currently 32 years old and almost come to an ending point of his career. His football career is completely colorful where he started his professional career with RS Futebol in 2002. He played for seven club already including Paris SG but his major club was two.

However, he would complete his move just after six months with PSG. Though, he was one of the prime target of Antonio Conte but Juve are seems specialists to land quality players. Here they have proved their ability again. Team Juventus passed their last transfer season with tight schedule where they bought some heavy quality players like Gonzalo Higuain from Napoli for €90 million which made him the 3rd most expensive player at the time. Besides, they bought Dani Alves and Medhi Benatia whose are the best defenders at the same time also. Now, adding Thiago Silva at their backline would make their defense more strong.

Now, at the middle of the Serie A season, the Old Lady is standing on the top position of the league point table where they have played total 13 matches and won eleven of them and their nearest opponent is Roma which won eight matches out of thirteen. And so, Juve are qualified for the Champions League group stage competition.