The FIFA World Cup Tickets will available from 14th September. According to reports the tickets will available at Moscow time 12.00. Brazil, Japan, Iran, Belgium, Mexico, Saudi Arabia and Korea Repblic being very desperate to confirmed the place in Russia. Along with these nation people from all over the world can apply for the tickets.

FIFA Secretary General Fatma Samoura mentioned that the ticket will be sold in fair. All the fans will get the equal chance to get that. No unfair issue will available for the event. He also accused that Russia promises to make a unique stretch of football history. They also promised to arrange the best atmosphere mind blowing organization in the stadiums. 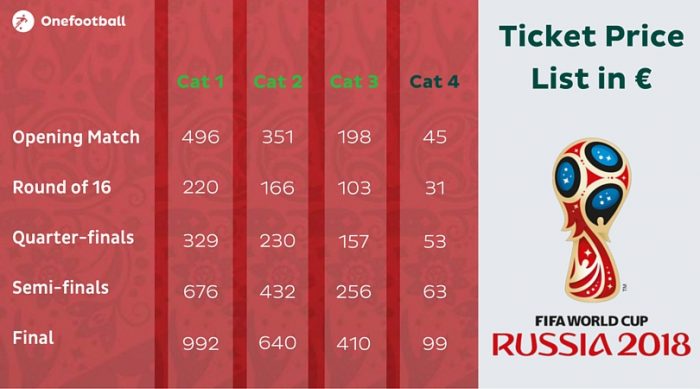 By the state of the reports the tickets which will be available has been divided into two phases. The First sales phase will commence from 14th September and will be ended 12th October 2017. Among this period the interested people have to submit the application. It has been clearly indicated that fans can apply in any day among this period and no difference will be considered in case of date. The application will be equally fathom of first day or dead line day. All the application has the similar chance of success.

However, Application will be selected by draw system and reportedly notified on 16th November. With the result the first stage will finish 16th to 28th November.

The second sales draw will start from 5th December 2017 which will be ended on 31st January in the next year. There also available one more chance to get tickets that first who come first they get. The period for the event selected 13th March to 3rd April 2018.

The fans will be given a Last-minute chance to buy ticket. The period for that start on 18th April and finished 15th July 2018. In that case the people who come first they will first rule will be followed.

There are some types of tickets has been issued for the tournament. You can buy individual tickets for different match. Venue basis tickets also available. You can buy specific stadium by choice.

People can pay money by Visa, payment cards or other payment methods. Accepting this method they also pay that be fan ID.

The fans of host country will get specially hospitality. They will be benefited exclusively by the authority. So guys don’t be late and apply for most popular World Cup tournament. To get update being stay with the site.