Tim Howard, the veteran United States of America goal keeper is set to be the veteran player of the upcoming CONCACAF Gold Cup. The 14th edition of the biggest tournament of the North America the Gold Cup will kick off in the July at the USA. Although the host country hasn’t yet picked their final squad for the tournament, they have just selected a preliminary list and total 6 goal stoppers’ name were included there. The very first name in the squad is of 38 years old experienced stopper Tim Howard who had a great career and played many where.

The Colorado Rapids man have played more than 20 years after his senior debut for the North Jersey Imperials back in the 1997 and you will be wondered to know that the experienced campaigner is yet to be finished. He is still the first choice keeper of his national team, according to the USA head coach Bruce Arena. The 6 feet 3 inch tall footballer have appeared in 115 matches for his country in the international arena. The likes of Brad Guzan, Sean Johnson, Bill Hamid, Joe Bendik, Jesse Gonzalez have been included alongside Howard. But the old man is going to be the first choice to stand between the sticks. 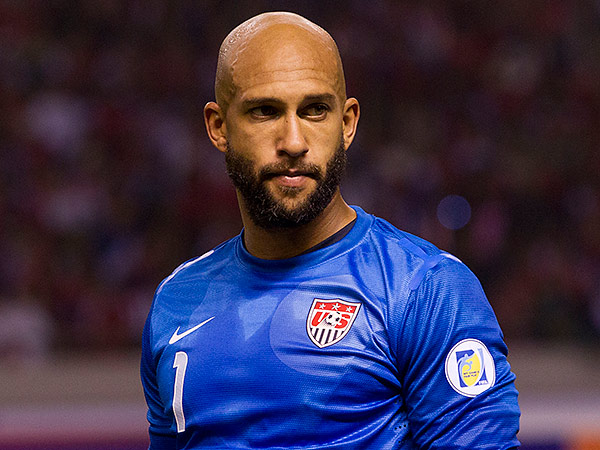 The goalie had an amazing time at the English Premier League as he was one of the best keepers in the EPL during his time. He had a superb spell at the top tier competition of English football. He moved to England in 2003 as he signed for Sir Alex Ferguson’s Manchester United in 2003 from Metro Stars. He featured in 45 matches for the Red Devils in his 4 seasons at the Old Trafford. He joined Everton on loan in the 2006-07 campaign before joining the Marseyside Blues permanently the very next season. He wore the Everton shirt for 10 seasons and appeared in 329 matches for the Toffees and despite being a goalie he had scored once for the Blues of Marseyside. He had a superb period at the Goodison Park and just moved to his own country’s club in the very last season.

Howard represented the United States youth teams too as he had played for US Under 20 and US Under 23 teams before making his national team debut. There is no doubt that the tall man is a legend and the fans will be hoping that the ever green old man will continue to impress the football world with his acrobatic saves in the upcoming tournament.