Milan Badelj who is a Croatian international and currently playing for Italian side Fiorentina is almost in the radar of the Spurs master Mauricio Pochettino who has already fixed his eye on him and though to make his first move in upcoming January when the transfer window will reopen. To secure his service, according to the reports, Spurs will have to meet £7 million release clause of the Croatian international who has only two years contract left with Lilies.

27 years old Croatia national team player joined with the Fiorentina from Hamburger SV in 31st August, 2014 but the fee was remain undercover but believed to be €5 million. He played two season with them and made 44 Serie A appearances with them but his scoring rate was so poor. He scored only twice times at this moment. Though, he assisted some more. But it seems that he failed to satisfy the Italian club. But however, they are not planning to sell him while they have still two years contract left but in the meantime, if they will receive perfect offer, then they would probably let him leave. 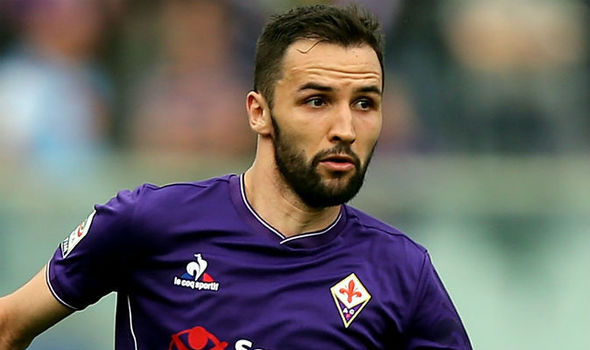 The former Dinamo Zagreb player has started new Serie A season with Lilies and made all four competitions with them where they won first two matches and drawn rest twice.

However, Spurs did not start well in the new season of Premier League but to draw their inaugural match in this ongoing tournament against Everton by 1 – 1. Besides, they won four matches out of their all six competitions as well in this season. They will play their next match against Manchester City. Their team in not completely ok a are working to fix their midfield position. Though, they bought two midfielders in the last moment of the summer transfer schedule named Moussa Sissoko from Newcastle United and N’Koudou from Marseille but their coach does not seems happy with them but to require another who would be perfect for his new formation. And he has focused on Lilies midfielder Milan Badelj and preparing to table a bid for him. and also they are willing to pay almost £7 million for him which would be enough for the Italian tier.

27 years old Badelj began his professional journey with Dinamo Zagreb and made his highest appearances with them which around 113 and scored 25 goals so far. He spent one loan period with Lokomotiva while playing with Dinamo. And next, he moved to the Hamburger in August, 2012 for €4.5 million.