Harry Kane the hurricane has been the most talked footballer of the last week. The Tottenham sensation is one of the most exciting young strikers’ in the world right now and is probably the best in the English Premier League. If you don’t agree, then just check the stats. Yes, there is no scope to disagree. The 23 years old scored 4 goals in a match in Tottenham’s mammoth 6-1 victory against the Leicester City who were the champions of the previous season. Kane actually snatched the spot light as well as the match ball in his history making night.

The England international went 2 down to 2 up in the title race as he overtook Everton forwrad Romelu Lukaku’s 24 goals with his 3rd goal and is currently leading the race with 26 goals. Despite missing some vital matches due to an injury who played almost 700 minutes less than the second placed Lukaku, is just a game away from winning the EPL golden boot. Kane was at his ultimate best at the King Power Stadium on the Thursday night and handed the Foxes such a massive defeat which they could never even imagine. 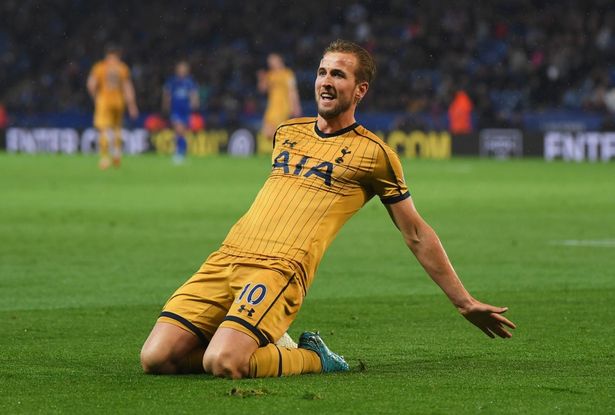 Kane joins elite panel with his performance against Craig Shakespeare’s side. The Hurricane labelled master piece becomes only the 5th player in the EPL history to score 25 goals or more in the consecutive seasons. He joins the likes of Robbie Fowler, Thierry Henry, Alan Shearer and Robin Van Persie. The 23 years old also became the 5th footballer to score 3 or more hat tricks in a season in the top level football. The English forward didn’t miss the chance to write his name in the history book.

The Londra born footballer opened the scoring on the 25th minute to give his side an early lead. He scored his second of the night in the 63rd minute and took his team into the driving position in the match. The star man completed his hat trick on the 88th minute and netted his last of the night during the injury time and Pochettino’s lads got a comprehensive 6-1 victory. South Korean attacker Heung Min Son netted the other two goals for his club. The Spurs have bagged 83 points from their 37 league games and will take on Hull City in their very last EPL game of the season at the KC Stadium on Sunday. They finish as the runners up as the Blues of Chelsea secures their 5th league trophy.