The United State being planning their kit idea for 2018 FIFA World Cup which going to take place Russia in next June. The WC championship is still eight month away and US starting pre-plan for the tournament. This time they planning what they wear in the competition.

The US Football Federation being very sensitive for the new jersey. The layout the design of kit something special and unique. One big thing that they keep in mind that is summer because the World Cup will be held in Summer so the kit must be comfortable according to the weather. 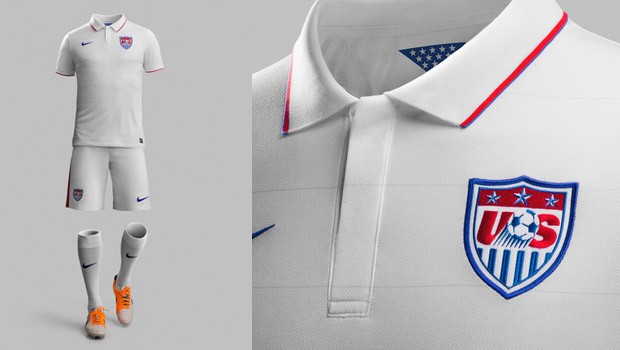 The rumor which has been spelled out in the air about US Jersey has leaked by Footy news. According to Footy Headlines has disclosed detailed about the wearing what US team wear in the tournament. It also flash the design, Logo, colour of the. The jersey designed with many kinds of portion including mock-ups liberty design which get a clear look them.

According to reports the home kit designed in white color with thin black color shed with portion of uniform. The front section designed with something blue and red shed. Where the left chest considering team logo and the right chest consisted sponsor logo.

With white socks and black boots the full uniform look simply outstanding. The sponsor of the wearing being Nike the leading company who also sponsor of maximum wearing of the football team.

The US Football Federation also layout for away kit. This being also very stylish, unique and very amazing. The model has been created with home version. The away kit considering navy-blue color with blue shed all portion of the jersey. The red team logo in left chest give the kit a gorgeous look where in the right chest holding the sponsor logo. With blue shock and red shoes it’s look so delicious. It will be a terrific look when the 11 boys run in the green field together. The third it yet not leaked.

However, these are only rumor. Nike just planning before finally produce that. The new Nike logo could be seen in the uniform hopefully. The American football fans are desperately waiting for the new look of the team.

The United State yet not qualified for the final tournament in Russia. But they starting to plan for the Uniform. The US boss very hopeful for the tournament. They confirmed their participation in the championship themselves. And that’s why they think so far about the wearing.