Five times CONCACAF Gold Cup champions and the host of 2017 gold cup United States’ competitors in the group stage of CONCACAF Gold Cup this year has been revealed. USA are in the group B where the other three competitors of USA are Nicaragua, Panama and Martinique. USA are currently in 30th position in FIFA world ranking, Panama are in 57th and Nicaragua are in 117th. As Martinique are not a member of FIFA so they are not eligible for FIFA world ranking. But they currently are at 85th position in ELO ranking.

Another giant and 7 times champion Mexico are in group C and they will have to face El Salvador, Jamaica and Curacao in initial round. And the winner of 2017 Copa Centroamericana Honduras and former Gold Cup champion Canada who won the Gold Cup trophy at 2000 are in the group A along with 2014 FIFA World Cup quarter finalist Costa Rica and French Guiana. Nicaragua is the last team to confirm their spot in this year’s tournament by beating Haiti in a two legged playoff match by 4-3 aggregate. 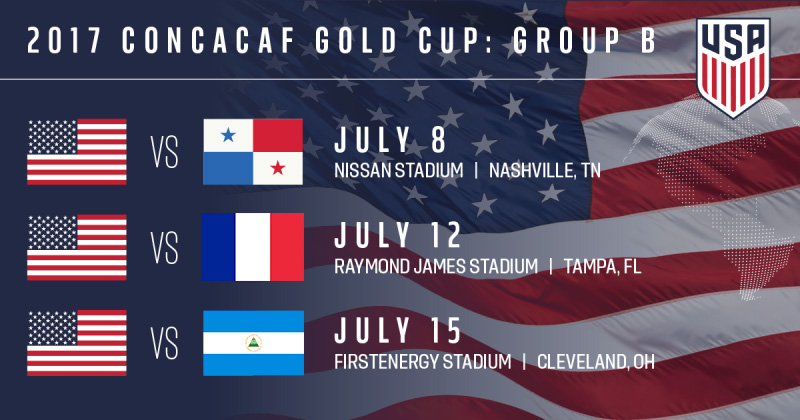 The schedule for Gold Cup was announced in a program in the Levi’s stadium at Santa Clara in California. This very stadium will also host the final of 2017 Gold Cup on July 26.

At that event Victor Montagliani the president of CONCACAF said that as the three groups have been decided there is an open view for the fixture of the tournament. He also added that this summer will be full of excitement and entertainment for the football fans across this football region because there are a lot of mouth-watering matches going to be played in this summer in the Gold Cup tournament.

The host nation USA will open the curtain of the tournament by playing their first group stage match against Panama at the Nissan Stadium in Nashville on 8 July. Then they will face Martinique in their second game at Tampa’s Raymond James Stadium four days later on July 12. And they will complete their group round with a match against Nicaragua on July 15 at Cleveland’s First Energy Stadium.

U.S. coach Bruce Arena said in an interview that this one is an important tournament for the Americans, they don’t take any of the opponents for granted, because no team is small here as they have come to compete here by beating the other teams in the qualifying round. He also said that Panama is a challenging team for any opponent and Martinique also have quality players to surprise any opponent. And Nicaragua are in fine form also as they have beat Haiti being 3-1 behind. He said that anyone be the opponents they should be prepared.

Mexico will start their race against El Salvador in the first match on 9 July at San Diego, then against Jamaica four days later at Sports Authority Field at Denver on 13 July and will play their last game against Curacao at the Alamodome stadium in San Antonio in Texas on 16 July.

The quarter-final games will be held in Philadelphia and Glendale, Arizona on 19-20 July and the semis will be held in at Arlington in Texas and at Pasadena in California on 22-23 July. And the final match of this event will be hosted by the Levi’s Stadium in Santa Clara, California.