Valencia, the out of form Spanish giants again denied, this time by the last placed club Osasuna. The two teams from the bottom region of the league table squared off in a La Liga clash at the Estadio El Sadar. Both the teams were struggling to find their forms and they both continued to carry on without getting a victory in a long while.

The game had no result as it ended as a draw and no team managed to get full 3 points from the game but the match offered a lot for the spectators as there was no shortage of goal in that game as no less than 6 goals were scored by the two teams. 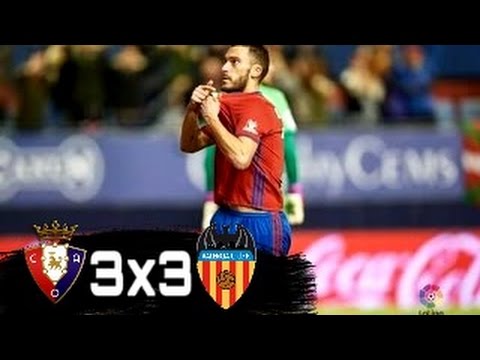 Spanish attacker Munir El Haddadi gave the visitors a flying start as he opened the scoring only on the second minute of the game. The former Barca forward put the ball into the net just a minute after the referee blown the whistle for the very first time on the Monday night. Full back Guilherme Siqueira provided the assist. It was the 4th competitive goal of the season for the 21 years old footballer. 30 years old striker Oriol Riera levelled the line for the hosts on the 7th minute of the game. It was the 3rd goal of the season for the Spaniard.

With just seconds remaining in the first half Orio Riera netted once again but this time he put it in their own net as he scored an own goal and the visitors finished the first half with the 2-1 advantage.

Midfielder Roberto Torres scored the first one of the second half on the 62nd minute and levelled the line for the 2nd time for the home side. It was the 5th goal of the season for the 27 years old Pamplona born player. Former Barcelona right back Martin Montoya scored his first ever Valencia goal on the 73rd minute of the game to give his side a 3-2 lead with less than 20 minutes remaining in the clock. The assist was provided by Munir on this occasion. The host’s defender Carlos Clerc scored his first ever Osasuna goal at the very end of the game to break the Valencia fans’ heart and to gain a point for his club.

Valencia is on the 17th position in the table with 13 points from the first 16 games and Osasuna are at the very bottom of the table with only 8 points from 17 games. Osasuna has managed to win only once this season so far and yet to get a home victory.