Real Madrid and Valencia battle for signing the Racing Club forward, Lautaro Martinez in the Summer transfer windows. The both clubs are strongly interested to bid the striker ahead of the Nou Camp.

Martinez is young Argentine footballer who consider as a good technical striker who can perform with his back or front to goal. The 18 years old love to lead the attack and best inside the box. He such a mind blowing attacker at a young age. For his extraordinary talent the two biggest club wanted to swap him in their side. But the forward not interested to leave home and nor wanted to go Europe so far. 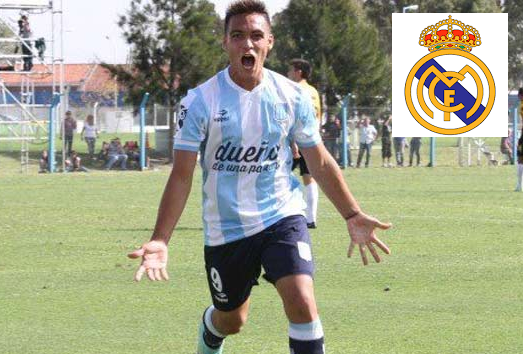 The release clause of the youngster set for €8 million but the bid is too high priced for the Vikings and they are planning to borrow him on season long loan. The deal also included the buying option offer at a high rated.

The teen ager disclosed the fact that he is interested to jump the Champions league club but at this moment, he wanted to stay at Racing Club where he could learn more than the Real.

He also mentioned that It being true that he received a rough draft of an offer from the Los Blancos to play a year on loan, with an option to buy. But his buy-out clause was a bit high at €8 million. If they really wanted to borrow him, they would have to pay that the sufficient amount to Racing side.

He also added that he was constantly talking with the president of Racing club and the coach was counting on him for the season. For him, his present club Racing consider the more priority rather than Real Madrid or any others else.

Lautaro termed that his father, who was also a footballer, always advised him to enjoy himself with responsibility. And he always tried to follow the advice  and tried get better day by day.  He wanted to learn some more things from his parent club and that is the main cause he gets not interest to leave the side at present.

On the interview he mentioned that he had no idea about the offer of  Atletico Madrid and Valencia. He just knew some interested club has made offer to bid three youngsters from Racing club and they are Fernando Valenzuela, Braian Mansilla along with himself.

Martinez was shown a very diplomatic performance in Argentina youth tournament at L’Alcudia in Spain and his outstanding playing style attracted the Los Blancos most. If all goes to the plan Martinez will be seen to play for the Vikings this year.