Italian legend Valentino Rossi blamed flag to flag race for his losing cause, He also admitted that in MotoGP racing, flag to flag race is his weak spot, after finished with poor standing in Czech Grand Prix. Valentino Rossi who is regarded as one of the best MotoGP rider by winning nine Grand Prix World Championships. He is in the MotoGP circuit for more than twenty years.

Valentino Rossi who started his racing career back in 1996 and by when he was a lesser known Italian in the racing world. His debut season was 1996 in MotoGP and after ten most important race, he ended up a podium once in 3rd in Austria. Back then, the seventeen years old made his competition in 125 cc segment and started pole position and maintain that till the finish line. 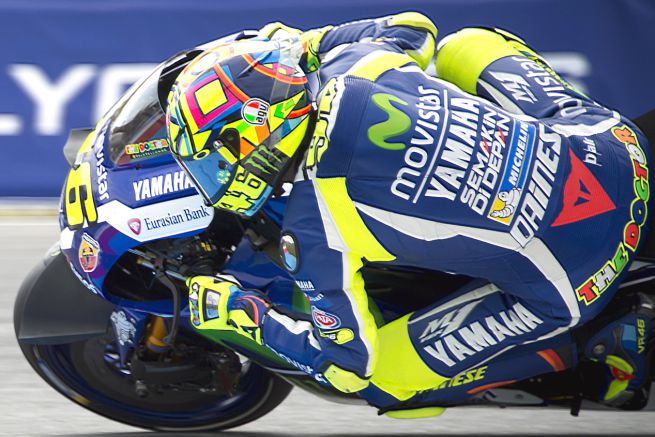 However, this 38 years old legend rider has suffered again flag to flag competition in Brno and finished race achieving poor position. He continuously suffered from the rules of flag to flag and in last at Sachsenring, he finished with eight due to the rules. And this time in Brno, it was the same case. There is obviously one difference in the two cases where twelve months ago, it was his own decision and now this time, it was team’s decision. If the rules failed to break him, he could finish Brno race in fourth position. So, after the event, the Italian stated that the team did wrong again.

This living legend admitted that flag to flag is not his strong point but at the end, result is not so bad at all. He also added that, in dry or in wet race, he can fight for the podium. He thinks that he has already improved a lot from this rules of flag to flag but there is still a lot to move. He expects that at the end of his career, he can outrun flag to flag.

Though, he missed his part in Brno but he is still happy for improving the result from last year at Sachsenring. Italian rider added Pedrosa took the correct decision and his analysis about the situation help him a lot.

Flag to flag race is a part of MotoGP nowadays which was introduced in 2005. Before that, the rules were different. So, since the applying the rules, Rossi suffered a lot though he is still one of the most talented and successful rider. But in last race in Czech Republic, all hoped to see him win but he has suffered from the same facts.