Valentino Rossi and Maverick Vinales are currently working with the same team Yamaha which is one of the top three team in MotoGP competition. But, recently Yamaha team could not do better result and in last few races, they failed to win. If we consider the recently finished race in Austria, there at Red Bull Ring, Yamaha team rider Johann Zarco finished with 5th position where first four positions were locked by Ducati and Honda. Valentino Rossi and Vinales are also from Yamaha and they finished with 6th and 7th position at Red Bull circuit. Both of them has blamed rear tyre to drop the speed. 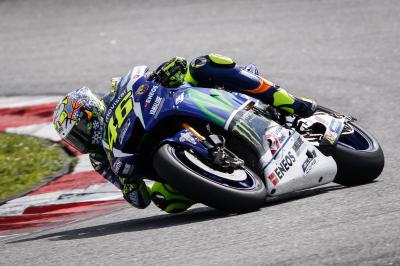 However, Rossi and Vinales selected hard rear tyre for the race and at the end they had no regret to selection. The Italian rider stated that, the whole race was so difficult  for him and obviously for Maverick and as well as for all the team. He expected for a great battle but reality was too ugly.

Rossi also disclosed that they tried with their maximum level in the race and he has no regret for their bike setting along with the tyre selection. It was proved well in the first lap where they were so strong in position. But just after twelve laps, they suffered a big drop from their precious bike and needed to slow down forcefully and by that time, riding the bike was very difficult. He also admitted that he also made another great mistake with the braking but however, he went slow.

However, this Italian legend still believes that Honda and Ducati company bikes which grabbed top four position must found some solution about the rear tyre. As a matter of fact, he also disclosed his opinion about them that he thinks to work hard in the upcoming races with their bike but specially Honda and Ducati have found something to make great speed without using rear tyre too much. He also added that considering the fastest lap, team Yamaha was too close in first two laps but later they had to slow down and lost the battle.

Team Yamaha has experienced this same things a plenty of times in the same season. But still they believe that problem will be solved soon. They world hard, try hard in the race but and started the race well. But things started to being difficult since the second half and they are not strong enough in second half. Rossi wanted to stay in front and also try to win but he was unlucky with the tyre which was sliding a lot. He also do not like to regret for the tyre but thinks that the main problem was the bike.