Vernon Philander could be playing in the champions Trophy this year at England and Wales as South Africa still trying to pick the new ball partner beside Kagiso Rabada. The search continues with Dwaine Pretorius, Wayne Parnell and Chris Morris after the previous opening bowler Kyle Abbot ended his international career. But, even after some months they have not got the right man to do the job of being Rabada’s opening partner with new ball. And the bowling coach Charl Langeveldt confessed that they have not got it all right till now and they need to find a solution of the problem.

He said that It will become a big problem whether they can’t pick up early wickets. He added that he believes that if any team pick up three early wickets of the opponent side then the winning chance increases a lot. He thinks they need to work on it. But, they are now in such a bad position that they are still searching the replacement for Abbot and the opening partner of Kagiso Rabada, let alone practicing some new things. 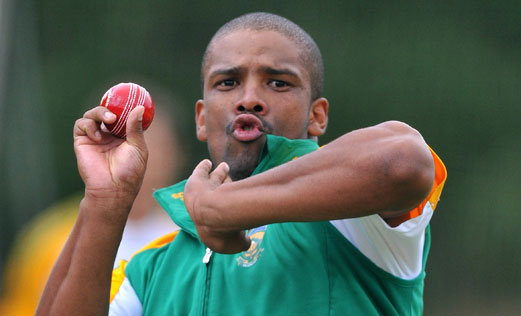 Now, Charl Langeveldt thinks Vernon Philander would be a perfect bowler to bowl with the new ball beside Rabada in the English condition, as often the weather condition is overcast. He is the perfect man for play if someone look for a pacer who can bowl five overs upfront. The bowling coach and former South African pacer says that they are nurturing all the possibilities to find out the best pair of bowlers.

Philander played his last One Day match in August 15, 2015. At the 2015 ICC World Cup Philander had been struggling throughout the whole tournament following his injury in hamstring, but suddenly he was called upon to play in the semi-final against New Zealand in place of the in form Pacer Kyle Abbot, after consulting with CSA’s Chief Executive Mr. Haroon Largat.

Abbot has revealed that he thought of quitting South African cricket immediately after the incident as the aftermath, but he decided to give himself another two years if he finds more regular spot in the national team squad. He was just about to do that after injuries to the most regular pacers Dale Steyn and Morne Morkel. But then it is revealed that he signed for English County team Hampshire and national team is his second preference now. Then, South Africa has to look for another pacer who can open the ball.

That made them coming back to Philander. Philander is now suffering from a slight ankle impingement and he has some ligaments torn in the same place as November 2015 injury. Doctors has prescribed him to take some time off to be ready for the upcoming ICC Champions Trophy tournament in June in England. He can come back in the county cricket for Sussex.

South Africa may also consider selecting the young fast bowler Lungi Ngidi for Champions Trophy although he has not played in the New Zealand series but he is very promising young bowler and these bowlers should get chance, Charl Langeveldt thinks.