Peter Crouch, the tall goal machine still has it, despite aging 36. The veteran striker is not finished yet. He is proving himself once again and showing the football word, what he is actually capable off. The 6 feet 7 inch footballer was thought to be finished after last season irregularity but no he has come back stronger this season and already managed to put his name on the score sheet for no less than 7 occasions so far. The former England international who just had netted on 2 occasions last season, out of his 30 outings for the club, has already got 7 in his 17 appearances for the Potters.

Stoke City hosted Everton in a mid week premier league clash at the Britannia Stadium on the Wednesday night. In their latest meeting the Potters had to go back home with nothing as the Toffees got a 1-0 victory at the Goodison Park, back in August 2016. Shay Given’s own goal was the decider on that occasion. 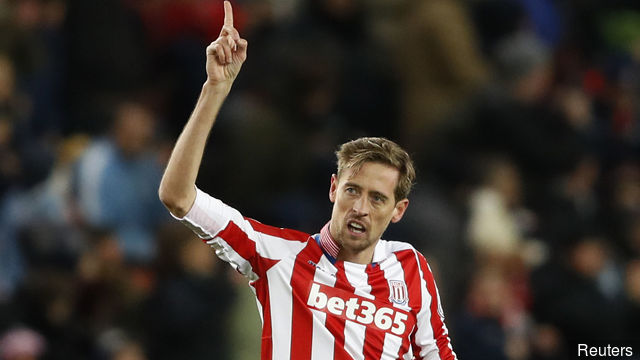 The Potters were looking for a revenge this time at their own home ground and the ever green Crouchy gave them a flying start as he scored on the 7th minute of the game to give the home side the lead. Austrian super star Marko Arnautovic was the assist provider. It is the 6th season for the tall man at the Britannia and he is just one goal away from reaching the 50 goals mark for his club as he has got 49 so far in his 187 outings for the Potters. The hosts could have left the field with a victory but once again Everton were lucky as the Stoke defender Ryan Shawcross put the ball in their own net with less than 10 minutes left in the first half and the match ended 1-1 as no more goals were scored in the 2nd half. But they are still unbeaten in the league in the 2017 as they had tasted their last league defeat against Chelsea, which was back in December.

On the other match of the night, giants Manchester United drew with relegation region’s Hull City in a goal less battle as no team could break the dead lock and the Red Devils’ fans must be disappointed with the result as an easy victory would have been expected from their star studded line up.

Stoke City retained their 9th position after this draw who has got 29 points from their first 23 league matches and the Toffees remained in the 7th ranking with 37 points from the very same number of game as their counterparts.