“Born in Manchester, Grown up in Manchester, now against Manchester.” Yes, you’ve understood it right, we are talking about Danny Welbeck. The guy who was a former Red Devil, born right there in the town of Manchester and was a part of the famous academy of Man United. He had a lot of memories there as he was one of those guys who passed half of their career at the Theater of Dreams.

The 26 years old has scored 20 times in his 92 competitive appearances for United. He was then sold to the league rival Arsenal during the coaching reign of Dutch manager Louis Van Gaal. Despite getting a good start in his very first season with the Gunners, the English attacker missed the majority of the last and the ongoing campaign due to injury. He netted on 8 occasions in his debut season at the Emirates Stadium. Last season he had 15 outings and found the net 5 times. This season was also a disappointing one for the 6 feet 1 inch tall striker but he has just shown his capability once again as he scored a vital goal when he faced his former side Man Utd in a crucial English Premier League match and have kept his team’s dreams alive to finish in the top 4. 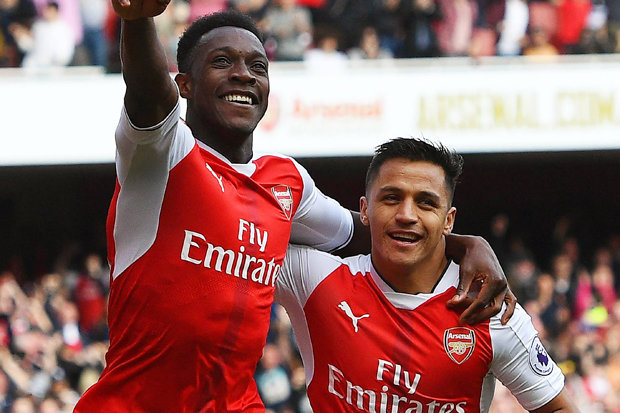 The two English giants came head to head on the Sunday afternoon in a very important EPL clash at the Emirates Stadium. The host have claimed a 2-0 victory over their long time rivals and secured all 3 points from the fixture. After a goal less opening half, Swiss midfield warrior Granit Xhaka opened the scoring on the 54th minute to give the home side the lead. It was his 4th strike of the campaign. Danny Welbeck doubled the lead just 3 minutes later and made the line 2-0 in the favour of his current club and denied his former team to earn anything from the match.

Arsene Wenger’s side is still in the 6th spot after this vital win but they have a game in hand as the Gunners have played just 34 league games meanwhile the Red Devils and Citizens both of them already have 35 outings. Gunners have a chance to win their next game and to overtake the 5th placed United. But they will have to pray for City’s result, if Pep Guardiola’s Man City doesn’t loose any point in their next 3 fixtures then Wenger’s side’s dream to finish in the top 4 won’t come true.