Partenopei and the Hammers are ready to sign Colombian striker in this season where the Italian side is in hurry due to the reason of losing Argentine star Gonzalo Higuain this summer. This Argentine great will fly to the Italian top tier and the deal is about to close and the release clause €94.7 million is also set. By losing him as sure, Partenopei are set their target to replace him with a same category player like Carlos Bacca. But the Hammers have got eye on him first.

The Hammers placed £25 million bid for the first time but seems to reject and next they have extended to £28 million finally which was approved by the Devil. But they were waiting for the player’s decision. According to the Gold, who is one of the three current owner of the Irons, the has set and now the decision is up to the player. 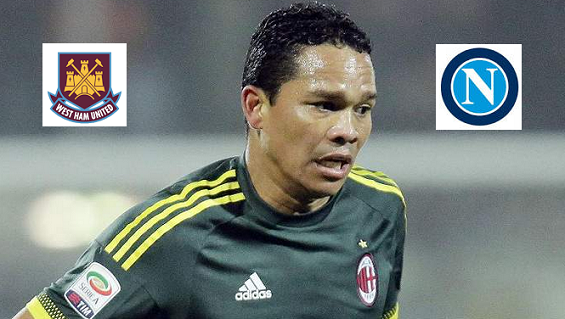 In the meantime, Napoli has made an offer for this 29 years old striker €20 million cash along with Mirko Valdifiori. But the offer was turned down due to Milan wanted more cash. So, the Partenopei has changed their plan and made a new offer. It seems that this Colombian is the Napoli’s first priority and Icardi is in 2nd. They are trying their best to bring this forward to their ground.

However, the Hammers are currently waiting to hear the last decision from Carlos himself who would possibly join them after the deal was set between West Ham and AC Milan. Though, Bacca will be their first sign in this summer.

On the other hand, it will the 3rd signing of Stadio San Paolo where they have bought Lorenzo Tonelli from Empoli and Emanuele Giaccherini from Sunderland this season.  It seems that time to be patient for both teams.

If team Napoli will fail to get contract with Bacca, they will move for Mauro Icardi who is currently their second target. They have also added on their cart Carlos Tevez who is currently played with the Boca Juniors but he could probably return to the Serie A again.

Carlos Bacca joined the Serie A side from Sevilla in 2nd July, 2015 for €30 million buyout clause reportedly. He made with them 38 league appearance in last season and scored 18 league goals. Bacca started his club journey with Atletico Junior in 2006 and loan to Barranquilla, Minerven and Barranquilla. He also played for Club Brugge in 2012/13 season.