The most gorgeous World Cup draw has been completed In Russia on Friday night, where eight group of contestants for Russia World Cup have been set up in a stunning ceremony. It was a biggest festival for what the world wide football fans waiting eagerly for a long time.

It was already decided that host Russia would be in the ‘A’ Pot. After the lottery, it is determined by which country will play which group.

According to the October FIFA rankings, there were four teams in the eight pots for the draw. The top seven teams with the host Russia are placed in number one pot. The second eight teams according to the ranking are in POT-2. As follow the serial the next group are holding eight country each. 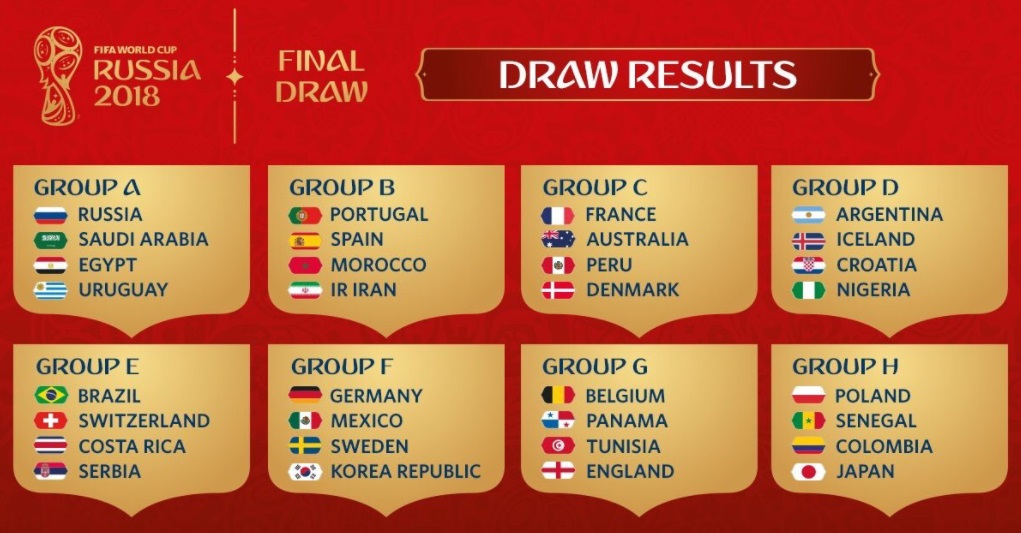 According to the rules, more than one country from any other continent except Europe was not kept in one group. And the maximum two teams from Europe were placed in six groups.

Whatever, Italy who grabbed the WC title for four time, not participating in the championship. It’s a very disappointing for the whole nation and fans.  In mean time, A total of 32 teams will be divided into eight groups Whom will be participated in the June-July World Cup.

Host Russia will face Saudi Arabia in the inaugural match from group-A. In the group match they also face with Uruguay and Egypt. Where the pot B consisted Portugal, Spain, Iran and Morocco.

The five time champion Brazil will face Switzerland, Costa Rica and Serbia in the group stage from group-E. Argentina belongs to Pot D where they have to fight Croatia, Iceland ad also Nigeria. The last pot holding  Poland, Colombia, Senegal and Japan. Here the full list of the draw given below.

Eight Pots of the Championship: