Brazil vs Colombia match has ended in a 1-1 draw and that has ended Brazil’s 9 match winning streak. Colombia rose up from a goal trail as they were 1 goal behind till the end of first half. Whatever, they have finally managed to end the game with 1 point which should prove vital at the qualifying stage of the Latin American group of FIFA world cup 2018 which will be held at Russia. Willian scored the goal for Brazil and Falcao scored the goal for Colombia at Barranquilla.

Brazil had already qualified for the World cup 2018 before the game with three games remaining by then. Whatever, they took the lead when dodged the Colombian goal keeper with a fine volley. The joy of Brazilians did not last much as Radamel Falcao scored by an awesome header which leveled the scoreline for Colombia. And the game ended with 1-1 scoreline. 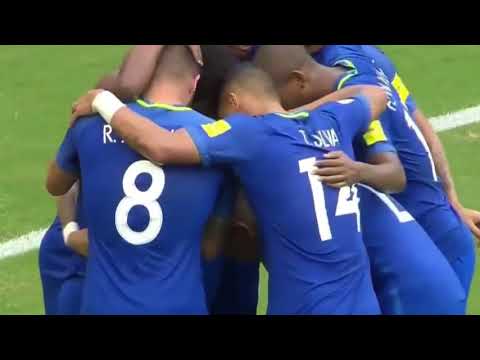 However, that draw has ended Brazil’s 9 match winning run and thus Colombia has taken up the 2nd position in the points table just after Brazil. They should be relieved for some time because there is no match until October this year. Whatever, from this group, top four teams will directly qualify for FIFA World Cup, 2018 at Russia. And the 5th team will have to play against New Zealand and there will be two games as two legged system.

Despite Brazil being the better team of the day, Colombia are the one who got the first real opportunity of scoring a goal in the game. It was at 23rd minute of the match when Colombia’s forward and former Real Madrid superstar James Rodriguez got a chance. But he could not finish it because the effort was not that good and ended up stopped by Brazilian goalkeeper  Allison. 10 minutes after this event Allison once again been the savior for Brazil as he directed a ball over the bar to outside from Thiago Silva who attempted to clear the ball from a corner but ended up heading the ball to his own goal. Allison once again stopped a free-kick shot from James just before the half time.

Whatever, Brazil got he lead by a fine goal from Willian before half time and they went to the break with a goal in their account. PSG and former Barcelona attacker Neymar provided the assist for him and he did not fail to pass the ball into the top corner of the net.

However, just 11 minutes after the second half started, Colombian proven warrior Radamel Falcao made the scoreline even for Colombia with a fine header. The goal was well deserved. Colombian winger Santiago Aras made some space at the right wing and made an awesome cross which just fell onto Falcao’s head inside the box and Falcao picked the ball well and headed the chance inside the net with ease.

James Rodriguez of Colombia had nearly bagged the game as he shot a fine free kick which beaten Brazilian goalkeeper Allison, but unfortunately returned off the woodwork.

Brazilian striker Roberto Firmino and another veteran Paulinho tried some more instances for Brazil but stayed failed to score any winner.